This is the third in a three-part series on evolving encryption key management best practices. The first post is available here. This research is also posted at GitHub for public review and feedback. My thanks to Hewlett Packard Enterprise for licensing this research, in accordance with our strict Totally Transparent Research policy, which enables us to release our independent and objective research for free.

Now that we’ve discussed best practices, it’s time to cover common use cases. Well, mostly common – one of our goals for this research is to highlight emerging practices, so a couple of our use cases cover newer data-at-rest key management scenarios, while the rest are more traditional options.

It feels a bit weird to use the word ‘traditional’ to describe a data center, but people give us strange looks when we call the most widely deployed storage technologies ‘legacy’. We’d say “old school”, but that sounds a bit too retro. Perhaps we should just say “big storage stuff that doesn’t involve the cloud or other weirdness”.

We typically see three major types of data storage encrypted at rest in traditional data centers: SAN/NAS, backup tapes, and databases. We also occasionally we also see file servers encrypted, but they are in the minority. Each of these is handled slightly differently, but normally one of three ‘meta-architectures’ is used:

Each of those meta-architectures can manage keys for all of the storage options we see in use, assuming the tools are compatible, even using different products. The encryption engine need not come from the same source as the key manager, so long as they are able to communicate.

That’s the essential requirement: the key manager and encryption engines need to speak the same language, over a network connection with acceptable performance. This often dictates the physical and logical location of the key manager, and may even require additional key manager deployments within a single data center. But there is never a single key manager. You need more than one for availability, whether in a cluster or using a hot standby.

As we mentioned under best practices, some tools support distributing only needed keys to each ‘local’ key manager, which can strike a good balance between performance and security. 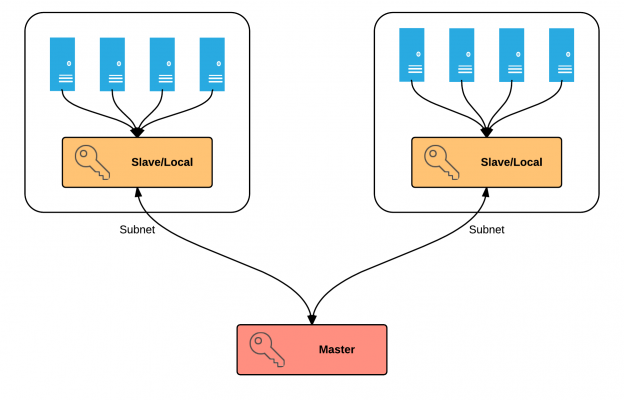 There are as many different ways to encrypt an application as there are developers in the world (just ask them). But again we see most organizations coalescing around a few popular options:

We deliberately skipped file and database encryption, because they are variants of our “traditional data center storage” category, but we do see both integrated into different application architectures.

Based on our client work (in other words, a lot of anecdotes), application encryption seems to be the fastest growing option. It’s also agnostic to your data center architecture, assuming the application has adequate access to the key manager. It doesn’t really care whether the key manager is in the cloud, on-premise, or a hybrid.

Speaking of hybrid cloud, after application encryption (usually in cloud deployments) this is where we see the most questions. There are two main use cases:

Generally you will want to run a virtual version of your key manager within the cloud to satisfy performance requirements, even though you could route all requests back to your data center. It’s still essential to synchronize keys, backups, and even logs back on-premise or to multiple, distributed cloud-based key managers, because no single instance or virtual machine can provide sufficient reliability.

Bring Your Own Key

This is a very new option with some cloud providers who allow you to use an encryption service or product within their cloud, while you retain ownership of your keys. For example you might provide your own file encryption key to your cloud provider, who then uses it to encrypt your data, instead of using a key they manage.

The name of the game here is ‘proprietary’. Each cloud provider offers different ways of supporting customer-managed keys. You nearly always need to meet stringent network and location requirements to host your key manager yourself, or you need to use your cloud provider’s key management service, configured so you can manage your keys yourself.