5 years. It doesn’t seem that long. It seems like yesterday I was on the phone screaming at the office manager of my (previous) dentist. He told the Boss something and then backtracked on it, and I had to write a check to fix the problem. I had just dropped my dental insurance and that little optional procedure wasn’t going to be covered as he had said it would. I told them to pound sand, which was a good move – I settled for perhaps 30% of the cost 18 months later, before it went to collection. 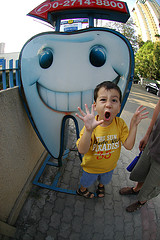 But at the same time, I dropped the dentist. He violated my trust and that was that. Though I seemed to have forgotten to find a new one. This was pretty uncharacteristic – I had been going every 6 months for cleanings since I was a kid. I had a handful of cavities but my teeth were in great shape. But none of my pals had a dentist they liked, so I kind of forgot about it. No big deal, I’ll find one. Sooner or later.

And one year became two years, which then turned into 5. Turns out a friend of ours recently moved his dental practice around the corner, so I had a new guy I trusted. Combined with the call I got last week about the Boss needing a root canal (she hadn’t been in 5 years either), I knew it was time. The fact that Arthur Treacher’s famous Tartar Sauce was caked onto my teeth notwithstanding, it was time to pay my penance and go in.

First of all, my guy does it right. Most folks hate the dentist, so he staffs his office with the nicest people on Earth. I wasn’t in a great mood, and within a minute they had me smiling and chatting it up. That is nothing short of amazing, given my general state of grumpiness. They were all super helpful and by the time my hygienist got through my health forms and X-rays, I knew her life story. Then she proceeded to sandblast my teeth for 35 minutes to clean them off. Evidently a lot of crap sticks to your teeth over 5 years.

Yes, it was uncomfortable. But penance is never pleasant. At least she gave my gums a rest halfway through. A little polish, a bunch of floss and I was ready to meet with the big man. I was a little apprehensive because I figured with all the plaque build-up my teeth must be a train wreck. He cracks some jokes and then pokes and prods with his tools. Oh crap, here it comes… 3 new cavities and about 5 other areas to watch. Wow, it could have been a lot worse. I guess all that fluoride my Mom made me take when I was a kid worked okay.

Of course he did mention my habit of grinding my teeth. Evidently that’s my subconscious way of dealing with the stress and paranoia of being me. Though it’s not causing too much damage right now. So I’ll need to be more aware and cut it out. Evidently I need to find another stress outlet. Maybe some vendor will have a nice squeeze toy or punching bag to give away at the RSAC next week.

He also made an impassioned plea for me to floss more. I hate flossing. I mean hate. But hey, if it means I won’t have to get more fillings next year and the year after that, then I’ll just do it. I have declared war on tartar, and that damn floss is a key armament in my arsenal so I have no choice. A man’s got to do what a man’s got to do.