The young people today laugh at folks with a couple decades of experience when they rue about the good old days, when your network was snaked along the floors of your office (shout out for Thicknet!), and trusted users were on the corporate network, and untrusted users were not.

Suffice it to say the past 25 years have seen some rapid changes to technology infrastructure. First of all, in a lot of cases, there aren’t even any wires. That’s kind of a shocking concept to a former network admin who fixed a majority of problems by swapping out patch cords. On the plus side, with the advent of wireless and widespread network access, you can troubleshoot a network from the other side of the world.

We’ve also seen continuing insatiable demand for network bandwidth. Networks grow to address that demand each and every year, which stresses your ability to protect them. Network security solutions still need to inspect and enforce policies, regardless of how fast the network gets. Looking for attack patterns in modern network traffic requires a totally different amount of computing power than it did in the old days. So a key requirement to ensure that your network security controls can keep pace with network bandwidth, which may be Mission: Impossible. Something has to give at some point, if the expectation remains that the network will be secure.

In this “Scaling Network Security” series, we will look at where secure networking started and why it needs to change. We’ll present requirements for today’s network which will take you into the future. Finally we’ll wrap up with some architectural constructs we believe will help scale up your network security controls.

Before we get started we’d like to thank Gigamon, who has agreed to be the first licensee of this content at the conclusion of the project. If you all aren’t familiar with our Totally Transparent Research methodology, it takes a forward-looking company to let us do our thing without controlling the process. We are grateful that we have many clients who are more focused on impactful and educational research than marketing sound bites or puff pieces about their products.

Let’s take a quick tour through the past 20 years of network security. We appreciate the digression – we old network security folks get a bit nostalgic thinking about how far we’ve come. Back in the day the modern network security industry really started with the firewall, which implemented access control on the network. Then a seemingly never-ending set of additional capabilities were introduced in the decades since.

Next was network Intrusion Detection Systems (IDS), which looked for attacks on the network. Rather than die, IDS morphed into IPS (Intrusion Prevention Systems) by adding the ability to block attacks based on policy. We also saw a wave of application-oriented capabilities in the form of Application Delivery Controllers (ADC) and Web Application Firewalls (WAF), which applied policies to scale applications and block application attacks.

What did all of these capabilities have in common? They were all based on the expectation that attackers were out there. Facing an external adversary, you could dig a moat between them and your critical data to protect it. That was best illustrated with the concept of Default Deny, a central secure networking concept for many years. It held that if something wasn’t expressly authorized, it should be denied. So if you didn’t set up access to an application or system, it was blocked. That enabled us to dramatically reduce attack surface, by restricting access to only those devices which should be accessed.

The moat worked great for a long time. Until it didn’t. A number of underlying technology shifts chipped away at the underlying architecture, starting with the Web. Yeah, that was a big one.

The first was encapsulation of application traffic into web protocols (predominately ports 80 and 443) as the browser became the interface of choice for pretty much everything. Firewalls were built to enforce access controls by port and protocol, so this was problematic. Everything looked like web traffic, which you couldn’t really block, so the usefulness of traditional firewalls was dramatically impaired, putting much more weight on deeper inspection using IPS devices.

But the secure network would not go quietly into the long night, so a new technology emerged a decade ago, which was unfortunately called the Next Generation Firewall (NGFW). It actually provides far more capabilities than an old access control device, providing the ability to peek into application sessions, profile them, and both detect threats and enforce policies at the application level. These devices were really more Network Security Gateways than firewalls, but we don’t usually get to come up with category names, so it’s NGFW.

The advent of NGFW was a boon to customers who were very comfortable with moat-based architectures. So they spent the last decade upgrading to the NGM architecture: Next Generation Moat.

Scaling Is a Challenge

Yet as described above, networks have continued to scale, which has increased the compute power required to implement a NGM. Yes, network processors have gotten faster, but not as fast as packet processors. Then you have the issue of the weakest link. If you have network security controls which cannot keep pace you run the risk of dropping packets, missing attacks, or more likely both. To address this you’d need to upgrade all your network-based security controls at the same time as your network to ensure protection at peak usage. That seriously complicates upgrades. So your choice is between:

Of course you don’t want all your eggs in one basket, or more accurately all your controls focused on one area of the environment. That’s why you implemented compensating controls within application stacks and on endpoint devices. But you still need to figure out an approach to ensure network security can scale.

The Cloud Is the Final Nail

Then the cloud happened. It’s basically the final nail in the coffin of the Moat architecture. Protecting critical assets was difficult, but at least you used to know where the data was. We’ll again point to our 1870s Man meme, that reminds us of the olden days when data was in the data center. Now it’s not clear what a data center is. 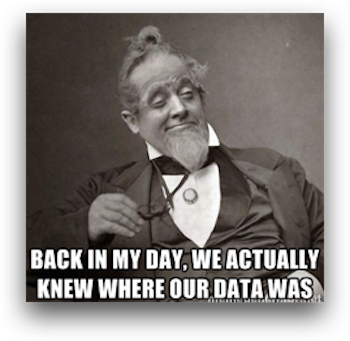 As organizations started adopting Software as a Service (SaaS) for things like customer relationship management, service desks, and even HR and accounting functions, network traffic dynamics started changing. This has been compounded with the widespread adoption of collaboration SaaS like Office 365 and G Suite. Employees began hitting web services for critical business functions, not necessarily needing to be on the corporate network at all. Some organizations did force employees to route their traffic through the VPN (and therefore the corporate network) to ensure it could be inspected and policies enforced, but that requires you to have sufficient ingress and egress bandwidth and capacity on the inspection points for all this traffic. It’s just not the best way to protect those employees and data.

Further exacerbating this change in traffic dynamics is the adoption of Infrastructure as a Service (IaaS) offerings, to initially supplement and then likely replace the corporate data center. You get more control over how traffic is routed through IaaS and which security controls are in place, but the native cloud providers offer strong network security capabilities which don’t require bottlenecks and inspection points, and many cloud-native applications leverage these embedded security capabilities.

Remember that the Moat is based on network security controls being inline, able to inspect traffic and enforce access control policies and detect threats. And once again the secure network isn’t going quietly, so many network security vendors now offer virtual network security devices for deployment in the cloud. We consider virtual firewalls are stopgap, not a long-term solution. The architecture of the cloud is based on broad network access and elasticity. Forcing network traffic through a series of inspection points is now swimming upstream.

But we don’t see the moat going away tomorrow, because on-premise networks are not going away any time soon. As long as organizations have data in their data centers and devices connecting to data from outside the organization, traditional network security is required, but clearly not sufficient to deal with tomorrow’s network security requirements (or even today’s).

So what now? We could jump to the end and describe our answer. But what fun would that be? Instead we’ll build a case for the network security architectural constructs we think are important moving forward, which starts with requirements for a scaled secure network. That will be our next topic.