Researching and writing about identity and access management over the last three years has made one thing clear: This is a horrifically fragmented market. Lots and lots of vendors who assemble a bunch of pieces together to form a ‘vision’ of how customers want to extend identity services outside the corporate perimeter – to the cloud, mobile, and whatever else they need. And for every possible thing you might want to do, there are three or more approaches. Very confusing.

I have had it in mind for several months to create a diagram that illustrates all the IAM features available out there, along with how they all link together. About a month ago Gunnar Peterson started talking about creating an “identity mosaic” to show how all the pieces fit together. As with many subjects, Gunnar and I were of one mind on this: we need a way to show the entire IAM landscape. I wanted to do something quick to show the basic data flows and demystify what protocols do what. Here is my rough cut at diagramming the current state of the IAM space (click to enlarge): 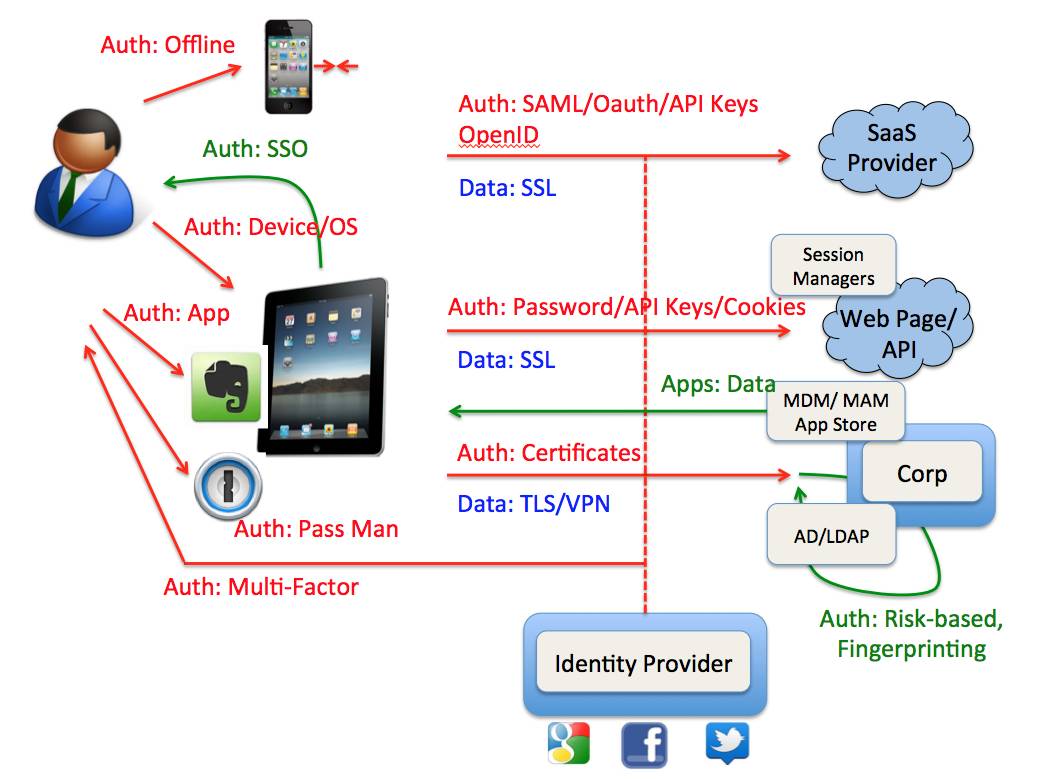 But when I sent over a rough cut to Gunnar, he responded with:

“Only peril can bring the French together. One can’t impose unity out of the blue on a country that has 265 different kinds of cheese.”

Something as basic as ‘auth’ isn’t simple at all. Just like the aisles in a high-end cheese shop – with all the confusing labels and mingled aromas, and the sneering cheese agent who cannot contain his disgust that you don’t know Camembert from Shinola – identity products are unfathomable to most people (including IT practitioners). And no one has been able to impose order on the identity market. We have incorrectly predicted several times that recent security events would herd identity cats vendors in a single unified direction. We were wrong. We continue to swim in a market with a couple hundred features but no unified approach. Which is another way to say that it is very hard to present this market to end users and have it make sense.

A couple points to make on this diagram:

Gunnar is working on a mosaic that will be a huge four-dimensional variation on Eve Mahler’s identity Venn diagram, but it requires Oculus Rift virtual reality goggles. Actually he will probably have his kids build it as a science project, but I digress. Do let us know what you think.

Thanks Adrian, it looks like you captured the essence of the problem. IAM is very fragmented and getting everything to play together nicely is quite challenging. Heck, just sorting it out corp internal is challenging enough without even going to the Interwebs. This is clearly something we need to get better at, if we are serious about ‘The Cloud’.