It was a Mr. Mom weekend, so I particularly appreciated settling in at the coffee shop on Monday morning and getting some stuff done. And it wasn’t just trucking the kids around to their various activities. It was a big weekend for all of us to catch up on work. XX1 has the CRCT standardized test this week, which is a big deal in GA, so there was much prep for that. Both XX2 and Boy have How to presentations in class this week. So they each had to write and practice a presentation. And I had to finish up our taxes and update the Securosis financials. With the Boss in absentia, I was juggling knives trying to get everything done. 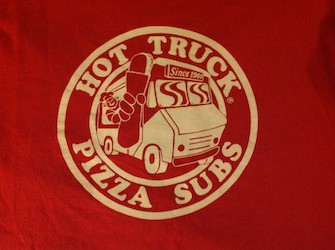 I look back on an intense but fun weekend. But when you spend a large block of time with kids, they inevitably surprise you with their interrogation… I mean questions. I was wearing my Hot Truck t-shirt (pictured at right), and the Boy was fascinated. What’s a Hot Truck? Is it hot? That was just the beginning of the questioning, so the Boy needed a little context. The Hot Truck is an institution for those who went to Cornell. Basically a guy made French Bread pizzas in a truck parked every night right off campus. Conveniently enough the truck parked around the corner from my fraternity house, and it was clearly the preferred late night meal after a night of hard partying. At any time of year you had folks milling around the truck waiting for their order.

Of course the truck itself was pretty cool. It was basically an old box truck fitted with a pizza oven. The city set up a power outlet right on the street and he’d drive up at maybe 10pm, plug in, and start cooking. Things didn’t get exciting until 1 or 2 in the morning. Then the line would be 10-15 deep and the money guy would write your order on a paper bag. No name, nothing else. Just your order. Obviously there were plenty of ways to game such a sophisticated system. You could sneak a peek at the list and then say the sandwich was yours when it came up. Then wait until the real owner of the sandwich showed up and tried to figure out what happened while you munched on their food. The truck was there until 4am or so – basically until everyone got served.

Over time, you got to know Bob (the owner) and he’d let you inside the truck (which was great on those 10-degree winter nights) to chat. You’d get your sandwich made sooner or could just take one of the unclaimed orders. He must have loved talking to all those drunk fools every night. But best of all was the shorthand language that emerged from the Hot Truck. You could order the PMP (Poor Man’s Pizza), MBC (meatballs and cheese), RoRo (roast beef with mushrooms), or even a Shaggy (a little bit of everything) – named after a fraternity brother of mine. And then you’d put on the extras, like Pep (pepperoni) or G&G (grease the garden – mayo and lettuce). All on a french bread pizza. My favorite was the MBC Pep G&G. Between the Hot Truck and beer it’s no wonder I gained a bunch of weight every year at school.

But all things end and Bob sold the Truck a few years ago. It was bought by a local convenience store and they still run the truck, as well as serve the sandwiches in their store in downtown Ithaca. It’s just not the same experience though – especially since I don’t eat meatballs anymore. But the memories of Hot Truck live on, and I even have the t-shirt to prove it.

We’re back at work on a variety of our blog series, so here is a list of the research currently underway. Remember you can get our Heavy Feed via RSS to get all our content in its unabridged glory.