If you caught my weekend rantings on Twitter, I had some free time this past weekend. The Boss was on a girl’s weekend. The kids are away at camp. And I had a meeting with a client first thing Monday morning. So I could have stayed in the ATL and taken an evening flight out. Or I could fly out first thing in the morning and find a way to get my blood pumping.

Shockingly enough, I chose the latter. There is nothing better to get your blood moving than pulling some Gs on a cool roller coaster. I love roller coasters. The anticipation of the drop. The screaming of the folks around you. That exhilaration is hard to match. At least for me.

Until it isn’t. Maybe I was just very calm on Sunday. But my heart rate hardly moved on the first wooden coaster. It was fast. It was fun. But it wasn’t scary. The two-loop two-corkscrew ride barely moved the needle either. Maybe I am just numb to coasters. Sure it’s fun, but where is the rush?

The stand-up coaster was cool. That was pretty exciting. As was the ‘flying’ coaster, where you ride on the outside of the track with your feet dangling. But there was still something missing. Then I saw it. The free fall ride. 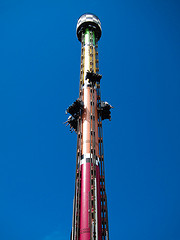 I am not a big fan of free fall rides. I’ll take loops, drops, and corkscrews every time. I rode the Tower of Terror at Disney with the girls, but that’s more because I needed to. I had to represent in front of my girls. Sure it was fun, but it’s not my favorite. But in need of an adrenaline rush, I figured it was time. Time to conquer my discomfort and just drop. So I stood in line and within a couple minutes I was ascending 200-something feet in the air.

The view was beautiful. The 16-year-old running the ride started chirping something about the ride being broken. That we’d need to descend slowly. But I wasn’t born yesterday. I took a deep breath and got ready.

Then I dropped. For 4 seconds anyway. It took my breath away, but I lived. My adrenaline spiked. My heart rate elevated. I felt alive! And I conquered the free fall. It was a good day. It’s not great to have to travel for work on a Sunday, but if you need to. at least make sure you have some fun.

Have you checked out our new video podcast? Rich, Adrian, and Mike get into a Google Hangout and… hang out. We talk a bit about security as well. We try to keep these to 15 minutes or less, and usually fail.

The Security Pro’s Guide to Cloud File Storage and Collaboration