Between Mira and I, we have 5 teenagers. For better or worse, the teenage experience of the kids this year looks quite a bit different; thanks COVID! They haven’t really been able to go anywhere, and although things are loosening up a bit here in Atlanta, we’ve been trying to keep them pretty isolated. To the degree we can.

In having the kids around a lot more, you can’t help but notice both the subtle and major differences. Not just in personality, but in interests and motivation.

Last summer (2019) was a great example. Our oldest, Leah, was around after returning a trip to Europe with her Mom. (remember when you could travel abroad? Sigh.) She’s had different experiences each summer, including a bunch of travel and different camps. Our second oldest (Zach) also spent the summer in ATL. But he was content to work a little, watch a lot of YouTube, and hang out with us. Our third (Ella) and fifth (Sam) went to their camps, where each has been going for 7-8 years. It’s their home and their camp friends are family. And our fourth (Lindsay) explored Israel for a month. Many campers believe in “10 for 2.” They basically have to suffer through life for 10 months to enjoy the 2 months at camp each year. I think of it as 12 for 2 because we have to work hard for the entire year to pay for them to go away.

Even if all of the kids need to spend the summer near ATL, they’ll do their own thing in their own way. But that way is constantly evolving. I’ve seen the huge difference 6 months at college made for Leah. I expect a similar change for Z when he (hopefully) goes to school in the fall. As the kids get older, they learn more and inevitably think they’ve figured it out. Just like 19-year-old Mike had all the answers, each of the kids will go through that invincibility stage.

The teenage years are challenging because even though the kids think they know everything, we still have some control over them. If they want to stay in our home, they need to adhere to certain rules and there is (almost) daily supervision. Not so much when they leave the nest, and that means they need to figure things out – themselves. I have to get comfortable letting them be and learning lessons. After 50+ years of screwing things up, I’ve made a lot of those mistakes (A LOT!) and could help them avoid a bunch of heartburn and wasted time. 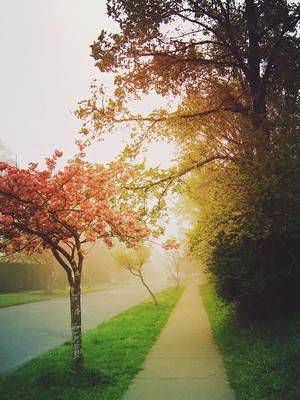 But then I remember I’ve spent most of my life being pretty hard-headed and I that I didn’t listen to my parents trying to tell me things either. I guess I shouldn’t say didn’t, because I’m not sure if they tried to tell me anything. I wasn’t listening.

The kids have to walk their own path(s). Even when it means inevitable failure, heartbreak, and angst. That’s how they learn. That’s how I learned. It’s an important part of the development process. Life can be unforgiving at times, and shielding the kids from disappointment doesn’t prepare them for much of anything.

The key is to be there when they fall. To help them understand what went wrong and how they can improve the next time. If they aren’t making mistakes, they aren’t doing enough. There should be no stigma of failing. Only to quitting. If they are making the same mistakes over and over again, then I’m not doing my job as a parent and mentor.

I guess one of the epiphanies I’ve had over the past few years is that my path was the right path. For me. I could have done so many things differently. But I’m very happy with where I am now and am grateful for the experiences, which have made me. That whole thing about being formed in the crucible of experience is exactly right.

So that’s my plan. Embrace and celebrate each child’s differences and the different paths they will take. Understand that their experiences are not mine and they have to make and then own their choices, and deal with the consequences. Teach them they need to introspect and learn from everything they do. And to make sure they know that when they fall on their ass, we’ll be there to pick them up and dust them off.

great post Mike. I miss these. hope you are well my friend.