As we described in the Introduction to this series, organizations can’t afford ignore the issue of privileged users (P-Users) any more. A compromised P-user (PUPwned) can cause all sorts of damage, and so needs to be actively managed. In the last post we presented the business drivers and threats – now let’s talk about solutions. As most analysts favor some kind of model to describe something, we’ll call ours the Privileged User Lifecycle.

In this post we will describe each aspect of the lifecycle at a high level. But before the colorful lifecycle diagram, let’s scope the effort. Our lifecycle starts when the privileged user receives escalated privileges, and ends when they are no longer privileged or leave the organization, whichever comes first. So here is the whole lifecycle: 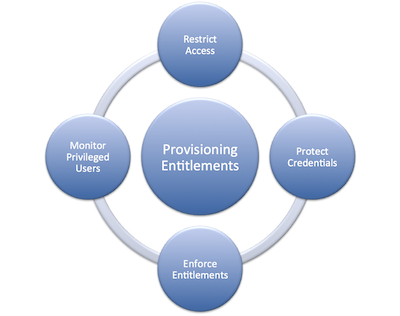 The Privileged User Management lifecycle starts when you determine someone gets escalated privileges. That means you need both control and an audit trail for granting these entitlements. Identity Management is a science all by itself, so this series won’t tackle it in any depth – we will just point out the connections between (de-)provisioning escalated privileges, and the beginning and end of the lifecycle. And keep in mind that these privileged users have the keys to the kingdom, so you need tight controls over their provisioning process, including separation of duties and a defined workflow which includes adequate authorization.

Identity management is repository-centric, so any controls you implement throughout the lifecycle need native integration with the user repository. It doesn’t work well to store user credentials multiple times in multiple places.

Another aspect of this provisioning process involves defining the roles and entitlements for each administrator, or more likely for groups of administrators. We favor a default deny model, which basically denies any management capabilities to administrators, assigns capabilities by an explicit authorization to manage device(s), and defines what they can do on each specific device. Although the technology to enforce entitlements can be complicated (we will get to that later in this series), defining the roles and assigning administrators to the proper groups can be even more challenging. This typically involves gaining a significant consensus among the operations team (which is always fun), but is on the critical path for P-User management.

Now we get to the fun stuff: actively managing what specific administrators can do. In order to gain administrative rights to a device, an attacker (or rogue administrator) needs access, entitlements, and credentials. So the next aspects of our lifecycle address these issues.

Let’s first tackle restricting access to devices. The key is to allow administrators access only to devices they are entitled to manage. Any other device should be blocked to that specific P-User. That’s what default deny means in this context. This is one of the oldest network defense tactics: segmentation. If a P-User can’t logically get to a device, they can’t manage it nefariously.

There are quite a few ways to isolate devices, both physically and logically, including proxy gateways and device-based agents. We will discuss a number of these tactics later in the series. When restricting access, you also need to factor in authentication, as logging into a proxy gateway and/or managing particularly sensitive devices should require multiple factors.

Obviously integrating private and public cloud instances into the P-User mangement environment requires different tactics, as you don’t necessarily have physical access to the network to govern access. But the attractiveness of the cloud mean you cannot simply avoid it. We will also delve into tactics to restrict access to cloud-specific and hybrid environments later.

Once a P-User has network access to a device, they still need credentials to manage it. Thus administrator credentials need appropriate protection. The next step in the lifecycle typically involves setting up a password vault to store administrator credentials and provide a system for one-time use. There are a number of architectural decisions involved in vaulting administrator passwords that impact the other controls in place: restricting access and enforcing entitlements.

If an administrator has access and the credentials, the final aspect of controls involve determining what they can do. Many organizations opt for a carte blanche policy, providing root access and allowing P-Users to do whatever they want. Others take a finer-grained approach, defining the specific commands the P-User can perform on any class of device. For instance, you may allow the administrator to update the device or load software, but not delete a logical volume or load an application. As we mentioned above, the granularity enforced here depends on the granularity you use to provision the entitlements.

Technically, this approach requires some kind of agent capability on the managed device, or running sessions through a proxy gateway which can intercept and block commands as necessary. We will discuss architectures later in the series when we dig into this control.

Finally, keep a close eye on what all the P-Users do when they access devices. That’s why we call this series “Watching the Watchers”, as the lifecycle doesn’t end after implementing the controls. Privileged User Monitoring can mean a number of different things, from collecting detailed audit logs on every transaction to actually capturing video of each session. There are multiple benefits to detailed monitoring, including forensics and compliance.

We should also mention the deterrent benefits of privileged user monitoring. Human nature dictates that people are more diligent when they know someone is watching. So Rich can be happy that human nature hasn’t changed. Yet. When administrators know they are being watched they are more likely to behave properly – not just from a security standpoint but also from an operational standpoint.

Of course this privileged user lifecycle is not a panacea. A determined attacker will find a path to compromise your systems, regardless of how tightly you manage privileged users. No control is foolproof, and there are ways to gain access to protected devices, and to defeat password vaults. So we will examine the weaknesses in each of these tactics later in this series. As with everything else in security, you aren’t looking for perfection – but make it a bit harder for attackers to gain root on your critical devices.

In the next post we will dig into Restricting Access, which is where old networking guys always start their security programs – protecting the network and building up from there.

« Previous Entry
How to Read and Act on the 2012 Verizon Data Breach Investigations Report (DBIR)
Next Entry »
Friday Summary: March 23, 2012