The next chapter in our Threat Intelligence arc, which started with Building an Early Warning System and then delved down to the network in Network-based Threat Intelligence, now moves on to the content layer. Or at least one layer. Email continues to be the predominant initial attack mechanism. Whether it is to deliver a link to a malware site or a highly targeted spear phishing email, many attacks begin in the inbox.

So we thought it would be useful to look at how a large aggregation of email can be analyzed to identify attackers and prioritize action based on the adversaries’ mission. In Email-based Threat Intelligence we use phishing as the jumping-off point for a discussion of how email security analytics can be harnessed to continue shortening the window between attack and detection.

This excerpt captures what we are doing with this paper:

So this paper will dig into the seedy underbelly of the phishing trade, starting with an explanation of how large-scale phishers operate. Then we will jump into threat intelligence on phishing – basically determining what kinds of trails phishers leave – which provides data to pump into the Early Warning system. Finally we will cover how to get Quick Wins with email-based threat intelligence. If you can stop an attack, go after the attackers, and ultimately disrupt attempts to steal personal data you will, right? We wrote this paper to show you how.

We would like to thank Malcovery Security for licensing the content in this paper. Obviously we wouldn’t be able to do the research we do, or offer it to you folks for this most excellent price, without sponsors licensing our content. 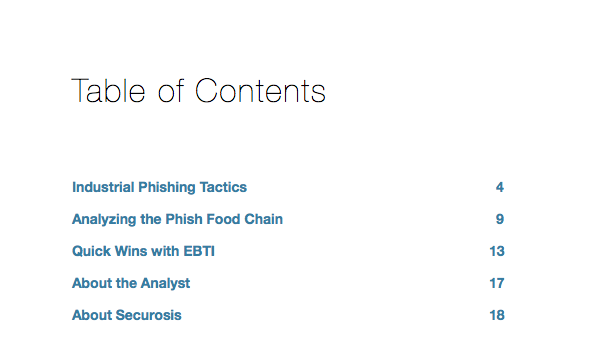