Can’t Unsee (and the need for better social media controls) 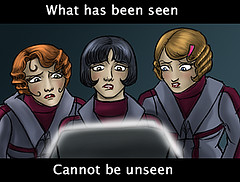 But it highlights the need for much greater control of social media. With advertising there are multiple layers of approval before anything ever hits the airwaves – and we still have branding fiascos. Social media changes the rules. One person can control a very highly followed account, and that person’s device can be attacked and compromised – giving attackers free reign to behave badly and impact the brand. Or a malicious insider could do the same. Or just plain old human error. It happens all the time, but not like the USAir tweet. That went viral fast, and the damage was done even faster.

It’s like Pandora’s Box. Once it’s open, you shouldn’t try to put a plane in it. (Sorry, had to…)

I know you have to move fast with social media. But folks will be lampooning USAirways for years over this. I don’t think their real-time response to the customer outweighs the downside, or that a little check and balance would be a terrible thing – if only to make sure you have multiple eyes on the corporate social media accounts.