As we discussed in Defining TI, threat intelligence can help detect attacks earlier by benefiting from the misfortune of others and looking for attack patterns being used against higher profile targets. This is necessary because you simply cannot prevent everything. No way, no how. So you need to get better and faster at responding. The first step is improving detection to shorten the window between compromise and discovery of compromise.

Before we jump into how – the meat of this series – we need to revisit what your security monitoring process can look like with threat intelligence.

We will put the cart a bit before the horse. We will assume you already collect threat intelligence as described in the last post. But of course you cannot just wake up and find compelling TI. You need to build a process and ecosystem to get there, but we haven’t described them in any detail yet. But we will defer that discussion a little, until you understand the context of the problem to solve, and then the techniques for systematically gathering TI will make more sense. 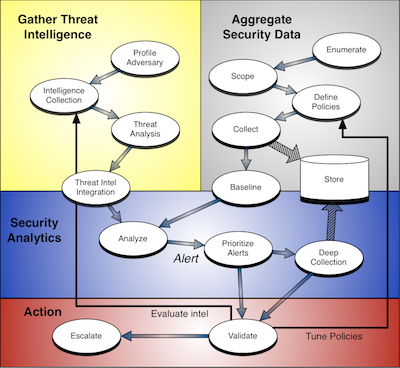 Let’s dig into specific aspects of the process map:

The steps involved in aggregating security data are fairly straightforward. You need to enumerate devices to monitor in your environment, scope out the kinds of data you will get from them, and define collection policies and correlation rules – all described in gory detail in Network Security Operations Quant. Then you can move on to actively collecting data and storing it in a repository to allow flexible, fast, and efficient analysis and searching.

Once you have an alert, and have gathered data about the device and attack, you need to determine whether it was actually compromised or the alert was a false positive. If a device has been compromised you need to escalate – either to an operations team for remediation/clean-up, or to an investigation team for more thorough incident response and analysis. To ensure both processes improve constantly you should learn from each validation step: critically evaluate the intelligence, as well as the policy and/or rule that triggered the alert.

For a much deeper discussion of how to Leverage TI in Security Monitoring check out our paper.

We are trying to detect attacks faster in this use case (rather than working on preventing or investigating them), so the most useful types of TI are strong indicators of problems. Let’s review some data sources from our last post, along with how they fit into this use case:

Of course you cannot always find a smoking gun, so specific TI data types are helpful for detecting attacks:

Of course your monitoring tool must understand how to parse these specific patterns and indicators, which is a good segue to integration.

The discussion so far begs one question: how and where should you use TI data? We suggest you start with your existing tool, which is likely a SIEM of some sort (or a shiny cousin: a security monitoring/analytics platform). To understand the leverage points we need to recall what SIEM does in the first place.

Basically, SIEM looks for patterns in security data via correlation and other fancy math techniques. Though a major restriction of SIEM technology is you need to know what to look for in the data, and that involves building complex rules to look for specific attack scenarios/threat models. Many organizations spend considerable time and money figuring out these complex rules, and then spend even more time and money tuning system to produce some semblance of actionable alerts. And if you ask SOC (Security Operations Center) staff, they will be happy to explain (colorfully) that many of the alerts – even after significant tuning – turn out to be false positives.

Availability of the data types described above changes what you should be looking for – at least initially. If you know there are a handful (or a couple handfuls) of attacks prevalent in the wild at any given moment, you should look for those. This approach is far more efficient and effective than looking for every possible attack.

But this only works if you can keep the rules up to date with the latest threat intelligence reflecting the latest attacks. Unless you have some kind of savant who can parse a threat intelligence feed and build SIEM rules instantly, you will need to automate loading and rule building in your monitoring tool. We discussed the emergence of standards like STIX and TAXXI to facilitate the integration of threat feeds into your security monitoring platform in our last post. But even without standards, many TI providers have built custom integrations to feed data into the leading SIEM and security analytics products/services, to extract value from data.

Why is this approach better than just looking for patterns like privilege escalation or reconnaissance, as we learned in SIEM school? Because TI data represents attacks that are happening right now in other networks. Attacks you won’t see (or know to look for) until it’s too late. In a security monitoring context, leveraging TI enables you to focus your validation/triage efforts, shorten the window between compromise and detection, and ultimately make better use of scarce resources which need to be directed at the most important current risk. That is what we’d call actionable intelligence.