After a somewhat lengthy hiatus – sorry about that – I will close out this series over the next couple days.

In this post I want to discuss container threat models – specifically for Docker containers. Some of these are known threats and issues, some are purely lab exercises for proof-of-concept, and others are threat vectors which attackers have yet to exploit – likely because there is so much low-hanging fruit for them elsewhere.

So what are the primary threats to container environments?

One area that needs protection is the build environment. It’s not first on most people’s lists for container security, but it’s first on mine because it’s the easiest place to insert malicious code. Developers tend to loathe security in development as it slows them down. This is why there is an entire industry dedicated to test data management and masked data: developers tend to do an end-run around security if it slows down their build and testing process.

What kinds of threats are we talking about specifically? Things like malicious or moronic source code changes. Malicious or moronic alterations to automated build controllers. Configuration scripts with errors, or with credentials sitting around. The addition of insecure libraries or back-rev/insecure versions of existing code. We want to know if the runtime code has been scanned for vulnerabilities. And we worry about a failure to audit all the above and catch any errors.

What the hell is in the container? What does it do? Is that even the correct version of the container? These are common questions I hear a lot from operations folks. They have no idea. Nor do they know what permissions the container has or requires – all too often lazy developers run everything as root, breaking operational security models and opening up the container engine and underlying OS to various attacks. And security folks are unaware of what – if any – container hardening may have been performed. You want to know the container’s contents have been patched, vetted, hardened, and registered prior to deployment. 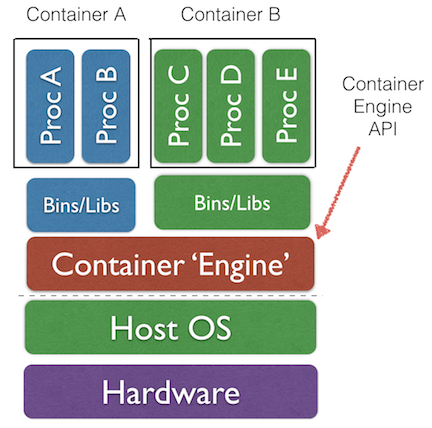 Finally, the underlying platform security is a concern. We worry that a container will attack the underlying host OS or the container engine. If it succeeds it’s pretty much game over for that cluster of containers, and you may have given malicious code resources to pivot and attack other systems.

If you are in the security industry long enough, you see several patterns repeat over and over. One is how each hot new tech becomes all the rage, finds its way into your data center, and before you have a chance to fully understand how it works, someone labels it “business critical”. That’s about when security and operations teams get mandated to secure that hot new technology. It’s a natural progression – every software platform needs to focus on attaining minimum usability, scalability, and performance levels before competitors come and eat their lunch. After a certain threshold of customer adoption is reached – when enterprises really start using it – customers start asking, “Hey, how do we secure this thing?”

The good news is that Docker has reached that point in its evolutionary cycle. Security is important to Docker customers, so it has become important to Docker as well. They have now implemented a full set of IAM capabilities: identity management, authentication, authorization, and (usually) single sign-on or federation – along with encrypted communications to secure data in transit. For the rest of the features enterprises expect: configuration analysis, software assessment, monitoring, logging, encryption for data at rest, key management, development environment security, etc. – you’re looking at a mixture of Docker and third-party solution providers to fill in gaps. We also see cloud providers like Azure and AWS mapping their core security services over the container environment, providing different security models from what you might employ on-premise. This is an interesting time for container security in general… and a bit confusing, as you have a couple different ways to address any given threat. Next we will delve into how to address these threats at each stage of the pipeline, with build environment security.