In the Introduction to the Early Warning System series, we talked about the increasing importance of threat intelligence for combating advanced attackers by understanding the tactics they are using right now against our defenses. With this intelligence, combined with information about what’s happening in your environment, you can more effectively prioritize your efforts and make better, more efficient use of your limited security resources.

We also point out that law enforcement has been using this concept doing for decades. A critical infrastructure or high-profile tourist target has a deployed set of internal security controls (such as security guards, video surveillance, etc.). Police implement these controls based on their best assessment of the risk – within the constraints of their funding, resources, and expertise. Of course they cannot cover everything – nobody can. An attacker using fairly simple reconnaissance tactics can understand the visible controls and build an attack plan to evade them. Sound familiar? Police need something to help focus their efforts. Something to give them a clue about where to look for the next attack.

That’s where threat intelligence comes in. In this case, law enforcement has folks who monitor threat sources (radical groups, weapons purchases, etc.) in order to identify patterns that could represent a tangible threat to a specific target. When law enforcement finds something they may act directly to neutralize the threat, or work with the targets to ensure they improve controls and watch for that particular class of threat.

Of course commercial entities operate under different constraints – they cannot rely on an external party like government to provide sufficient threat intelligence. So commercial enterprises need to both deploy controls and build their own analysis capabilities to gather and process threat intelligence, which is neither easy nor quick. Investment and commitment are required, to look beyond your walls and try to become a bit less reactive to the attack space. You also need a structured process, to focus only on what you see internally, but also what’s happening externally. That what the Early Warning System is all about.

An Early Warning System (EWS) involves implementing a systematic process to collect data internally, gather intelligence from third parties, and then analyze the information for particular dangers to your environment. We will first list each part, and dig into the functions through the rest of this series. 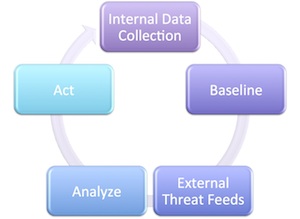 The first two steps in the process involve looking inward. We have done a ton of research over the past few years into technologies that enable you to analyze your security data. Whether your aggregation platform comes takes the perspective of SIEM / Log Management, Vulnerability Management, or even network forensics doesn’t really matter. But you need a tool to aggregate your security data, with the ability to also handle external information.

Once the data is aggregated, the next step involves establishing a number of baselines to identify ‘normal’ for your environment. Of course normal is not really the right term – no environment is really normal. But you need to start somewhere. So equipped with baselines describing what typically happens in your environment, you can start looking for anomalies – deviations from those baselines – which may indicate something funky and thus bear further investigation.

As a technology foundation for EWS, your existing tools could be entirely suitable. But most data aggregation tools are built to specifically for compliance. They are designed to put a lot of security data in one place and generate reports, but not so good at analysis or pattern detection – especially if you don’t know the patterns to look for in advance. Your EWS needs to be built on strong analytical tools – with a threat-centric view of the world rather than a focus on compliance reporting.

Once you have your internal data in order, you cross-reference it against attacks seen in the wild via external threat research. You will quickly learn that there is no lack of threat data. Every vendor has a security research team, and they are constantly generating content – both for external consumption (mostly public relations) and for integration into their own products and services. There are also providers who generate stand-alone threat data feeds for integration into existing tools. So you need to identify the threat intelligence sources to use and manage the overlap between different sources. Finally, you need to integrate your feeds into the tool(s) you use to aggregate security data.

The next part of the process is to provide context, for both the internal and external data you gathered, and systematically apply it to your specific situation. This requires not just data and an analytics engine to evaluate the data and find patterns. But the key is to interpret the data, and determine the degree of risk posed by each threat you analyze – to your environment. This is neither cheap nor easy to automate. We know of several organizations, each with dozens of folks processing threat intelligence and assessing the risk to their respective organizations. This is not common (and these folks have very mature security programs), but it’s simply not realistic to buy a toaster and expect it to pump out actionable threat intelligence.

Finally you have information which might indicate an attack is coming. Of course you won’t have precision on when or where. So what do you do? Do you take action? Do you just monitor for indicators of the attack commencing? Do you do nothing and wait until systems are down before mopping up the mess? At one time or another you will likely find yourself doing each of the above. Equipped with contextual threat intelligence from your EWS, you can implement workarounds and remediations to address the issues you found. Or not, depending on your culture and ability to make bets that might be wrong.

Of course that is an important concept, now and through the rest of this series. Building an Early Warning System doesn’t mean you will always be right. Just like any other system designed to predict the future, it will be wrong, and you will see false positives. So one success criterion for implementing an EWS is realism about what it can do and what it can’t. It’s about optimizing the resources at your disposal, by focusing on things the most likely (successful) attacks.