It started out great. Fantastic even. The Dome was fired up. The team started fast. Field goal. Forced punt. Matty Ice throws a pick. Then the Falcons force a fumble and get the ball back. Touchdown. Forced punt. Field goal. 13-0. Red zone stop on a huge 4th and 1. Touchdown on a bomb. Huge sack to end the half. The Falcons were up 20-0. This was it. The year they finally exorcise the playoff demons. 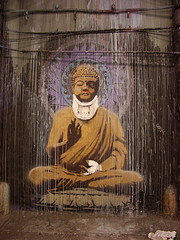 We all cheered for the kids showing off their football prowess during halftime as national Punt, Pass & Kick finalists. Then the second half started. Seattle drives down and scores. Then the Falcons respond with a 7+ minute drive to go up 27-7 when the 3rd quarter ends. The crowd goes bonkers. Only one team has blown a 20+ point lead in the playoffs at this point in the game. Elation sets in. It’s over. Until it’s not.

Bad tackling. Mental lapses. A tight end playing on a ripped-up foot keeps making huge catches over the middle. Seattle scores. 27-14. Matt Ryan throws a pick. Seahawks drive down the field again. Touchdown Seattle. Cover that guy! 27-21. Oh crap. Now is the time. Make a play, offense. Get some first downs, burn up some clock and get this done. Come on, man! 3 and out. Falcons punt. This is not good. You can feel the tension in the Dome. All the negative thoughts creep in. All the playoff failures. How could they choke? How could they?!?!?

Falcons force a punt. OK. It’s under control now. Just a few first downs and it’s over. 3 and out. Again. Seahawks have the ball back. 5:32 left. Seahawks driving again. They are on the Falcons 3. They score. Falcons are down 28-27. WTF? This would be the choke to end all chokes. We were stunned. The Dome was in shock. 31 seconds left. How could it end like this? Again? So disappointed. So so disappointed. Sure it was a good season, but another one and done in the playoffs and it’s going to set this franchise back years. Unbelievable. It’s only a football game, but it sure doesn’t feel that way.

The Falcons get the ball back with 31 seconds on the clock. They need 40 yards to get into field goal range. First pass goes for 22 to a receiver named Harry D. Could they? Dare we have hope? The odds are long and they’ve done it before, but not with a berth in the NFC Championship at stake. 19 seconds. Another pass goes for 19 more yards to 36 year old Tony Gonzalez, a sure fire first ballot Hall of Famer who has never won a playoff game. Ever. They’re in field goal range. They set up the kick. I can’t breathe. Literally. No one can. This is it. The Boss squeezes my hand. The kick is up. The kick is good. HOLY CRAP. We scream. We hug. We embrace people we don’t even know. We scream some more. We jump up and down. You can’t hear anything because everyone is screaming. I give the Boss a huge hug. I mean huge. Instant elation emerges out of the depths of despair. It doesn’t get better than this.

But it’s not over. There are still 8 seconds left. Seattle gets the ball back in good field position due to a muffed squib kick. A short pass. 2 seconds. Seattle is on the 50. Hail Mary time. The pass is in the air. The Dome holds its breath some more. The Falcons’ Julio Jones comes down with the ball. It’s finally over. Playoff demons vanquished. We just rode a 3.5 hour emotional roller coaster. A pretty high high. Then a very low low. Then the best moment in any football game I’ve ever experienced. I had emotional whiplash. I was nauseous. I was exhausted. My whole body hurt. My voice was gone.

And I can’t wait until next Sunday to do it again. Rise up Falcons. It’s time.

Not bad for a Giants fan!  Great recap of the game, Mike. Go Falcons!