Happy 2013 everybody! At the dawn of a new year, most folks think more proactively about what they want to change – and what they don’t. I have spoken many times about the need to embrace change and even to learn to love change. Change is good. Stagnation is bad. But the trouble lies in how you achieve that change – and how you react when change is forced upon you. 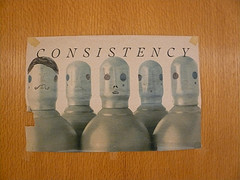 We were in the car the other day, and the Boss asked the kids about their New Year Resolutions. She and XX1 had some great ideas about what they resolved to do in the coming year. Everything they said was outstanding. But here’s the rub. Talk is easy. Resolutions are easy. Writing down resolutions is harder than saying them. And actually doing something consistently is infinitely harder. That’s why so many folks fail year after year regarding their resolutions.

I am working on not putting a pin in every thought balloon floated in my direction. Cynics are trained to deflate ideas before they get airborne. It’s not the most positive feature of my OS. So in an attempt to do things differently, I held off from the typical interrogation that would follow a resolution. My instinct is to dig into the plan. I want everyone to lose weight or communicate better or get in shape or do whatever you’ve resolved to do. But without a plan – and more importantly an accountability partner – the odds are not in your favor. That’s not being pessimistic, it’s being realistic.

You see, resolutions have to do with what you want to change. By the time we get through January, the best laid plans will be totally screwed up by external forces requiring you to adapt. Maybe it’s an injury that inhibits your exercise resolution. Or a new high profile project that gets in the way of family dinners. That’s why I largely stopped setting goals. And I don’t make New Year’s resolutions. Why should I wait until the end of December to do the right thing?

That doesn’t mean I plan to stagnate. I know where I want to get to. But I’m less set on how I get there. Regardless of what happens, I’ll adapt accordingly. I did a bunch of analysis at the end of last year to figure out what needs to happen every month to hit my desired economic outcome. But life will intrude and I’ll need to adapt. I know how I need to eat to maintain my desired weight and how many days I need to exercise to strengthen my body accordingly. Some days I’ll do well, other days I won’t.

My plan is to look back in 12 months and feel good about what I’ve accomplished. But there are no hard or fast rules about what that means. There are no specifically defined goals. It’s about making sure I’m moving in the right direction. I’ll get there when I get there. If I get there. The only thing I specifically focus on is consistent effort. The beauty of not being tied to specific goals is that I can add variety to my actions and my activities. I get that’s an oxymoron.

To me, consistent variety means to work hard every day. Be kind every day. Make good choices every day. And adapt as needed. You know, grind. Do stuff. Make mistakes. But move forward. Always. For a pessimist, I’m pretty optimistic about 2013.

Editors note: With great pleasure we welcome one of our two favorite Canadians as an Incite contributor. Jamie Arlen (@myrcurial for you Twitterati) will be contributing a piece each week, and his stuff will be tagged JA. So now you know where to send the hate mail…

« Previous Entry
Threatpost: What Have We Learned in 2012
Next Entry »
Karmic Career Advancement