I was in the car the other day with one of the kids, and they asked me if I ever get lost. I have a pretty good sense of direction and have been able to read maps as long as I remember. I was probably compensating for my Mom’s poor sense of direction and my general anxiety at a young age about feeling lost. But it’s different today. With the advent of ever-present GPS and decent navigation, I can say it has been a long while since I have really been lost. I get misdirected sometimes, but that lasts maybe a minute and then I figure out my way. But these gadgets are no silver bullet. 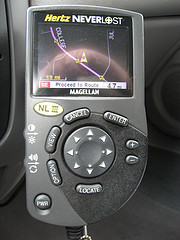 A couple years ago I was doing a seminar tour and ended up in Detroit. I did my thing, got some sleep, and was ready to head out to the airport the next morning. The car was equipped with a GPS from the rental car company, so I hit the button to take me to the airport and started driving. About 40 minutes later, I started thinking something was screwy.

Then I got that feeling in the pit of my stomach, when I realized I selected the wrong airport in the GPS. I was driving in the wrong direction for over a half-hour and I was very unlikely to make my flight. And this was not the day to miss the flight. The Boss was leaving town and I had to get the kids from their various schools and activities. Of course, when I finally got to the right airport, all the flights back to Atlanta were booked up. I was totally screwed. So I paid a whole bunch of idiot tax and bought a first class seat on another airline. And I still had to call in a bunch of favors from friends and family to take the kids until I could get home. Feels like I’m still paying for that period of idiocy.

Let’s just say I double check every time I enter an address into a GPS nowadays.

But now let’s consider navigation metaphorically. We have technology that can help us get anywhere we want to go. It’s built into your car and you carry it in your pocket. But that doesn’t make it any easier to know where you should be going. And even when you get there, you are usually disappointed with the destination… Maybe it wasn’t everything you cracked it up to be. Sometimes the grass isn’t greener when you get there.

When I think about it and play out the metaphor a bit further, there’s another reason it has been a while since I was last lost. I guess at this point in my life, I don’t get lost because I’m not trying to get anywhere. I’m very fortunate to be in a situation where I can actually say that. And mean it. Given my cultural programming, it took me a long time to accept where I am and to not strive to get to where I’m not. There are some days I forget – I am human after all. But there is no GPS for life. That’s worth remembering.

« Previous Entry
Detection vs. Protection and the Game of Words
Next Entry »
DDoS: Distributed, but not evenly