It’s just another day. So what that, many years ago, you happened to be born on that day. Yes, I am talking about birthdays. Evidently when it’s your birthday it means people should treat you nicely, let you do what you want, write you cards, and shower you with gifts. We’d probably all like that treatment the other 364 days too, right? But on your birthday I guess everyone deserves a little special treatment. Well, my birthday was this past weekend, and it was pretty much perfect. 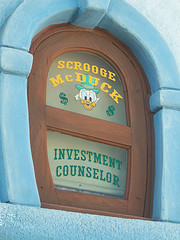 The day started like any other Sunday, but things were a bit easier. I got the kids up and they didn’t give me a hard time. No whining about Sunday school. No negotiating outfits. I didn’t once have to say “that’s not appropriate to wear to Temple!” They made their own breakfast, not requiring much help. The kids had made me nice cards that said nice things about me. I guess one day a year they can get temporary amnesia. I dropped them off for Sunday school and headed over to my usual Sunday spot to catch up on some work. Yes, I work on my birthday.

To put myself in a good mood, I started with my CFO tasks. Think Scrooge McDuck counting his stacks of money. That’s me. Scrooge McIncite making sure everything adds up and every cent is accounted for. I did some writing – Scrooge McIncite gets things done. I got ahead of my mountain of work before I head out on my golf weekend.

Then I got to watch football. All day. The Falcons won. The Giants won. The Panthers, Eagles, and Redskins lost. It was a pretty good day for my teams. The Giants game was televised on local TV, and through the magic of DVR I could record both the Falcons and the Giants and not miss anything. How lucky is that?

Then my family took me out to a great dinner. I splurged quite a bit. Huge breakfast burrito for dinner. That’s right, I can eat a breakfast burrito for dinner. It’s my birthday, and that’s how I roll. Then I had some cheesecake to top off the cholesterol speedball. When was the last time I did that? Evidently rules don’t apply on your birthday. The servers had no candles, and they sang Happy Birthday to me, which I didn’t let ruin my day.

In fact, nothing was going to ruin my day. Even when the Saints came back and won the Sunday night game. As I snuggled into my bed at the end of a perfect day, I did take a minute to reflect on how lucky I am. I don’t allow myself to do that too often or for too long, because once he’s done counting today’s receipts Scrooge McIncite starts thinking about where tomorrow’s money is going to come from. But the next day will be here soon enough, so one day a year I can doze off thinking happy thoughts.

Certainly a fantastic piece of work.Your blog is so interesting and very informative.It has relevant information. Thanks for posting this. Definitely a great piece of work!