Last Friday was the end of the third calendar quarter. For you math majors out there, that’s the 3-month period ending September 30. Inevitably I had meetings and calls canceled at the last minute to deal with “end of quarter” issues. This happens every quarter, so it wasn’t surprising. Just funny. 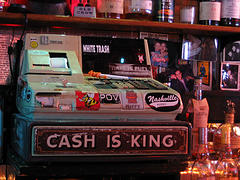 Basically most companies report their revenues and earnings (even the private ones) based on an arbitrary reporting period, usually a calendar quarter. Companies provide significant incentives for sales reps to close deals by the end of each quarter. Buying hardware and software has become a game where purchasing managers sit on large purchase orders (POs) until the end of the quarter to see what extra discounts they can extract in exchange for processing the order on time. I guess other businesses are probably like that too, but I only have direct experience with hardware and software. Even small companies can enjoy the fun. We subscribed to a new SaaS service last week and the rep threw in an extra month on the deal if we signed by Sept 30th.

So the last week of the quarter runs something like this: Sales reps pound the voice mails of their contacts to see if and when the PO will be issued. They do this because their sales managers pound their voice mails for status updates. Which happens because VPs of Sales pound the phones of sales managers. It’s a good thing phone service is basically free nowadays. A tweet from Chis Hoff reminded me of the end of Q craziness as he was sweating a really big order coming through. I’ve never had the pleasure (if you can call it that) of waiting for a 9 figure PO to arrive, though I have done my share of hunching over the fax machine thru the years.

But the whole end of Q stuff is nonsense. Why are orders any less important if they come in on October 3? Of course they’re not. But tell that to a rep who got his walking papers because the deal didn’t hit by Sept 30th. That’s why I like cash. I can pay my mortgage with cash. We can buy cool Securosis bowling shirts and even upgrade to the iPhone 5, even if AT&T forced us to pay full price since we already upgraded to the 4S and weren’t going to wait until March to upgrade. Cash is king in my book.

As the CFO, I don’t have to worry about accruals or any of that other accounting nonsense. It’s liberating. Do work. Bill clients. Get paid. Repeat. Obviously cash accounting doesn’t work for big companies or some smaller businesses. And that’s OK. It works for us.