I am not a car guy. Nor do I need an ostentatious house with all sorts of fancy things in it. Give me a comfortable place to sleep, a big TV, and fast Internet and I’m pretty content. That said, I enjoy art. The Boss and I have collected a few pieces over the years, but that has slowed down as other expenses (like, uh, the kids) have ramped up. But if someone were to drop a bag of money in our laps, we would hit an art gallery first – not a Ferrari dealer. 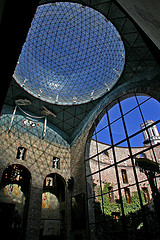 When we go on holiday, we like to see not only the sights, but also the art. So on our trip to Barcelona last spring, we hit the Dali, Miro, and Picasso museums. We even took a walking art tour of the city, which unfortunately kind of sucked. Not because the art sucked – the street sculptures and architecture of Barcelona are fantastic. The guide was unprepared, which was too bad.

As budgets continue to get cut in the public school systems, art (and music) programs tend to be the first to go. Which is a shame – how else can our kids gain an appreciation for the arts and learn about the world’s rich cultural heritage? Thankfully they run a program at the twins’ elementary school called “Meet the Masters.” Every month a parent volunteer runs a session on one of the Masters and teaches the kids about the artist and their style of art, and runs an art project using the style of that master. I volunteer for the Boy’s class, after doing it for two years for XX1.

Remember, I do a fair bit of public speaking. Whether it’s a crowd of 10 or 1,000, I am comfortable in front of a room talking security. But put me in front of a room of 9 year olds talking art history, and it’s a bit nerve wracking. I never wanted to be that Dad who embarrasses my kids, and see them cringe when I show up in the classroom. With their friends I crack jokes and act silly, but in the classroom I play it straight. And that’s hard. I can’t make double entendres, I have to speak in simple language (they are 9), and I can’t make fun of the kids if things go south.

I can’t use my public speaking persona, so I need another way to get their attention and keep them entertained. So I break out some technical kung fu and impress the kids that way. Most of the classrooms have projectors now, so I present off my iPad. They think that’s cool. When it’s time to check out one of the paintings, I found this great Art Project site (sponsored by evil Google). It shows very high resolution pictures of the artwork online, and allows you to highlight the nuances of the piece and show off the artist’s talent. Last month we covered Vermeer’s The milkmaid. Check out that link. How could you not be impressed by the detail of that painting?

Today I am doing a session on Braque. He was a cubist innovator and Picasso’s running buddy. So I will spend some time tonight checking out his work, getting my whiz-bang gizmos ready, and trying to avoid being too much of a tool in front of the Boy’s class tomorrow. If one or two of them gain a better appreciation for art, my time will be well spent.