I read a profile of Spanx’s Sara Blakely in Forbes Billionaires issue, and the tip that really resonated was that at dinner each night, her father would ask each child what they failed that day. Wait, what? He would be disappointed if the kids didn’t fail something because it meant they weren’t stretching far enough out of their comfort zone. Damn, I wish I thought of that. 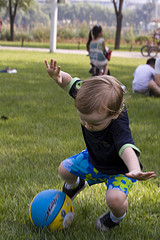 There is an unnecessary stigma about failure and it’s counter-productive. This is programmed into our heads from a young age. “Winning isn’t everything, it’s the only thing.” Hyper-competitive helicopter parents screaming at their kids to win their 4-year-old T-ball game. I have to say the Boy competes in both lacrosse and tennis, but he doesn’t much care whether he wins or loses. He just moves on. He certainly didn’t get that trait from me – I was very competitive growing up and hated to lose at anything. But I admire it in him.

As a result of my unwillingness to screw up, I didn’t really try enough new things. I would compete when I knew I had a very good chance to win. Looking back, it would have served me much better to have tried stuff and made mistakes and realized that I could fall down, and it would be okay. Think about it – we fail every day at all sorts of things, both little and big. Entrepreneurs talk about failing fast and pivoting to the next idea quickly. They fall down but reload and move on.

I love the guys who breathe their own exhaust and think they are all who because they joined a company like Google or Facebook early enough to make some money, but not so early that they had much to do with the company’s success. These folks think it was them, while in reality they were lucky. To be fair, these lucky few do learn from being around success. Some can parlay that into success in their next venture. But most don’t. The folks who got blown out are more interesting. As one of them I can tell you that I learned a lot more from failing.

In the security world a breach occurs when something fails. Some of the small-minded clean up the mess and move on. They don’t spend enough time trying to figure out what went wrong. They hope the problem will go away. It won’t. It never does. They should do a post-mortem. They need to identify what didn’t work and fix it. An organization’s culture must allow for mistakes, though it’s realistic to expect employees not to make the same mistake twice.

I am pretty good about telling my kids that it’s okay to make mistakes. As long as they learn from them. So when they have a no good, horrible, very bad day, messing everything up, I always ask what they have learned. Usually they can tell me, but if not I’ll use it as a teaching moment to explain what they could do differently next time. Ultimately I try to make it clear to them that it’s okay to fail. Really, it’s okay. As long as they get back up and jump into the mix.

Photo credits: Oops! “This Was NOT What I Intended!” originally uploaded by Bridget Coila

Interested in Cloud Security? Are you in EMEA (or do you have a ton of frequent flyer miles)? Mike will be teaching the CCSK Training class in Reading UK on April 8-10. Sign up now.

Mike: Today’s @WSJ has an article about companies urging their employees to take more risks.  Risk implies failure, at least some of the time. I blogged about the article and thought you might find the post interesting on The Next Phase at: http://bit.ly/Zwfaft