My career has been turbulent at times. I know that’s shocking to those of you who know me personally. When I was invited not to come to work at my last job in VA, I already had a good position at a hot start-up in Atlanta lined up. They were well aware of my situation, and once I was a free agent the deal got done quickly. I had one real estate agent selling a house in VA, and another looking for property in Atlanta. Full speed ahead. 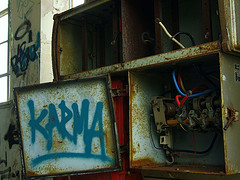 Then I got the strangest call from my “new” CEO. He said they did a final reference check and a past boss pretty much drove a shiv into my gut. WTF? So now the sure thing in Atlanta wasn’t so sure. And even better, if this guy was talking me down in VA, my odds of getting another job if Atlanta fell through weren’t so good. So I went into damage control mode. I wasn’t going to go down like a lamb, so I came out swinging. I called in every favor I had. I created dissension at my former employer by having folks in all parts of the organization talk to the Atlanta company confidentially to provide a different viewpoint.

If I was going to investigate other occupations, it was going to be on my terms. Not because some whackjob CEO was trying to cover his behind as he lost control of his company. And you know what? I got the job. The good guys won. My friends stepped up for me bigtime, and I never forgot that. I promised myself that if I ever knew anyone else getting similarly screwed, I’d do everything in my power to help them. Everything. I’d return the favor when I had the opportunity.

A few weeks ago I had lunch with a friend, who told me a story eerily similar to mine. He got caught in the crossfire of a regime change and received the blackball treatment that happens when backchannel chatter is more important than demonstrable accomplishments. My blood was boiling. I knew what I had to do. So at RSA last week I looked for an opportunity to do it.

Thankfully one of my clients mentioned he was looking for the skill set my friend possessed. I jumped and put his name into the hat. I also mentioned his predicament and personally vouched for my guy. I called in a favor and asked my client to give him a chance. I don’t know if it’ll work out, but my guy is in the game and that’s all I asked.

And when my friend called yesterday to thank me, I smiled. It was a really big smile. Like some type of karmic balance returned to the world, if only for a few minutes. I smiled because I remember being in that spot. I remember how powerless I felt. How a control freak had no control. And I remember how relieved I felt when I learned those folks stepped up for me. But most of all, it felt really good to be able to keep that promise I made to myself all those years ago.

My friend asked what he could do for me. My answer was absolutely nothing. This wasn’t about me. It was about righting a wrong and doing the right thing. But I did tell him to pay it forward. Someday he’ll meet someone in the same position and he needs to help. And he will.

TIP A DRINK TO RICH: Let’s all congratulate Rich and his wife Sharon for the successful launch of their latest joint project. The latest addition to the team, Ryan Mogull, was born Sunday night. Rich will be taking some time with the family for the rest of the week, but should be back in the saddle soon. And yes, we are shopping for a Securosis onesie.

Interested in Cloud Security? Are you in EMEA (or do you have a ton of frequent flyer miles)? Mike will be teaching the CCSK Training class in Reading, UK, April 8-10. Sign up now.