Do you ever look at your To Do list and feel like you want to just run away and hide? Me too. I talk a lot about consistent effort and not trying to hit home runs, but working for a bunch of singles and doubles. That works great for run rate activities like writing the Incite and my blog series. But I am struggling to move forward on a couple very important projects that are bigger than a breadbox and critical to the business. It is annoying the crap out of me, and I figure publicly airing my issues might help me push through them. 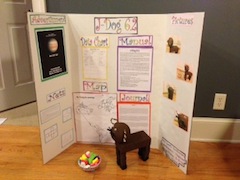 I have tried to chunk up these projects into small tasks. That’s how you defeat overwhelm, right? But here it just means I need to push a bunch of tasks back and back and back in my Todo app rather than just one. I think my problem is that I feel like I need a block of time sufficient to complete a smaller task. But I rarely have a solid block of a couple hours to focus and write so I get stuck and don’t even start.

But that’s nonsense. I don’t have to finish the entire task now – I just need to do a bit every day, and sure enough it will get done. Is that as efficient as clearing the calendar, shutting off Twitter and email, and getting into the zone? Nope. It will definitely take longer to finish but I can make progress without finishing the entire task. Really, I can.

As much as I try to teach my kids what they need to know, every so often I learn from them too. XX1 just finished her big year-end project. It was a multi-disciplinary project involving science, language arts, and social studies. She invented a robot (J-Dog 6.2) that would travel to Jupiter for research. We went to the art store and got supplies so she could mock up the look of the robot; she had to write an advertisement for the product, a user manual, and a journal in the robot’s voice to describe what was happening – among other things. She did a great job. I’m not sure where she got her artistic chops or creativity but the Boss and I didn’t help her much at all.

How does that relate to my issue getting big things done? She worked on the project a little every day. She cut the pieces of the model one day. Painted it the next. Outlined the journal on the third. And so on. It’s about making progress, one step at a time. She finished two days early so she didn’t have to do an all-nighter the day before – like her old man has been known to do.

So I need to take a lesson and get a little done. Every day. Chip away at it. I have an hour left in my working day, so I need to get to work…

The CISO’s Guide to Advanced Attackers