Before she left for camp XX1 asked me to download her iPhone photos to our computer, so she could free up some space. Evidently 16gb isn’t enough for these kids today. What would Ken Olson say about that? (Dog yummy for those catching the reference.) I happened to notice that a large portion of her pictures were these so-called selfies. Not in a creeper, micro-managing Dad way, but in a curious, so that’s what the kids are up to today way. A selfie is where you take a picture of yourself (and your friends) with your camera phone. Some were good, some were bad. But what struck me was the quantity. No wonder she needed to free up space – she had all these selfies on her phone. 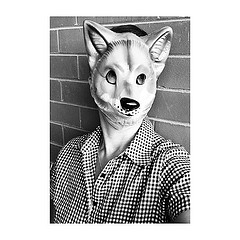 Then I checked XX2 and the Boy’s iTouch devices, and sure enough they had a bunch of selfies as well. I get it, kind of. I have been known to take a selfie or two, usually at a Falcons game to capture a quick memory. Or when the Boss and I were at a resort last weekend and we wanted to capture the beauty of the scene. My Twitter avatar remains a self-defense selfie, and has been for years. I haven’t felt the need to take a new selfie to replace it.

Then I made a critical mistake. I searched Flickr for selfies. A few are interesting, and a lot are horrifying. I get that some folks want to take pictures of themselves, but do you need to share them with the world? Come on, man (or woman)! There are some things we don’t need to see. Naked selfies (however psuedo-artistic) are just wrong.

But that’s more a statement about how social media has permeated our environment. Everyone loves to take pictures, and many people like to share them, so they do. On the 5th anniversary of the iTunes App Store, it seems like the path to success for an app is to do photos or videos. It worked for Instagram and Snapchat, so who knows… Maybe we should turn the Nexus into a security photo sharing app. Pivoting FTW.

As for me, I don’t share much of anything. I do a current status every so often, especially when I’m somewhere cool. But for the most part I figure you don’t care where I am, what my new haircut looks like (pretty much the same) or whether the zit on my forehead is pulsating or not (it is). I guess I am still a Luddite.

@dwayne, amazingly enough I have an opinion on this as well. Sounds like a rehashed version of the old Jericho line of thinking. They called for the end of firewalls as well, and we all know how well that was received in the market.

Fact is, the port/protocol firewall isn’t very helpful to deal with advanced attacks. Thus the movement towards application awareness and a consolidation of functions on the perimeter. I’ve yet to talk to anyone that has really embraced this model, so I don’t really have an opinion on the true impact. Not yet anyway.

Regarding the AV discussion, remember there are cheap and borderline free alternatives for AV in the market. I know of a few organizations that have gone with these low end offerings to check the compliance box, but use more advanced techniques in the data center and on critical/at-risk devices.

The data center is a bit of a different animal and it’s likely easier to get a compensating control exemption from an assessor if you’ve locked down your servers with something like application white listing. Much harder on the endpoints because of the issues of breaking the security model with grace periods and the like…

@Dwayne - that specific example is to get Rid of network complexities around tiered networks based upon level of secrecy. I’ve seen companies use this model through doc sharing apps and some DRM implementations but they are not common. Not sure who will talk but ill check.

As far as getting rid of AV given PCI ironically means more network segmentation.

I’m very interested in Adrian’s item under “No firewall for you” as I have heard a number of organizations discussing this.  I really want to hear some post-facto analysis from companies who go this route, to find out what differences (positive and negative) they experience.

Along those lines, I have been in conversation with a couple of companies who want to get rid of antivirus because they feel it isn’t adding value (at least in the data center).  Unfortunately, they both have to answer to PCI which explicitly requires AV so that is a bit of a problem.

In general, I think the more we can streamline the number of countermeasures and controls we have to manage, the better.  But it is definitely a “look before you leap” problem.

BTW - I’m with you on the selfies - definitely fascinating.  My daughter told me about “duck face” selfies, which are apparently a sub-class of the normal selfie.  You can find a lot of them on Flickr, too: http://www.flickr.com/search/?q=duck face selfie