Obviously bad news sells. If you have any doubt about that, watch your local news. Wherever you are. The first three stories are inevitably bad news. Fires, murders, stupid political fiascos. Then maybe you’ll see a human interest story. Maybe. Then some sports and the weather and that’s it. Let’s just say I haven’t watched any newscast in a long time. But this focus on negativity has permeated every aspect of the media, and it’s nauseating. 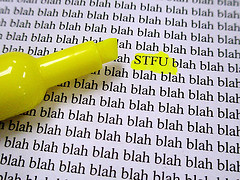 Let’s take the Olympics, for example. What a great opportunity to tell great stories about athletes overcoming incredible odds to perform on a world stage. The broadcasts (at least NBC in the US) do go into the backstories of the athletes a bit, and those stories are inspiring. But what the hell is going on with the interviews of the athletes, especially right after competition? Could these reporters be more offensive? Asking question after question about why an athlete didn’t do this or failed to do that.

Let’s take an interview with Michael Phelps Monday night, for example. This guy will end these Olympics as the most decorated athlete in history. He lost a race on Sunday that he didn’t specifically train for, coming in fourth. After qualifying for the finals in the 200m Butterfly, the obtuse reporter asked him, “which Michael Phelps will we see at the finals?” Really? Phelps didn’t take the bait, but she kept pressing him. Finally he said, “I let my swimming do the talking.” Zing!

But every interview was like that. I know reporters want to get the raw emotion, but earning a silver medal is not a bad thing. Sure, every athlete with the drive to make the Olympics wants to win Gold. But the media should be celebrating these athletes, not poking the open wound when they don’t win or medal. Does anyone think gymnast Jordyn Weiber doesn’t feels terrible that she, the reigning world champion, didn’t qualify for the all-around?

As if these athletes’ accomplishments weren’t already impressive enough, their ability to deal with these media idiots is even more impressive. But I guess that’s the world we live in. Bad news sells, and good news ends up on the back page of those papers no one buys anymore. Folks are more interested in who Kobe Bryant is partying with than the 10,000 hours these folks spend training for a 1-minute race.

On days like this, I’m truly thankful our DVR allows us to forward through the interviews. And that the mute button enables me to muzzle the commentators.

We are waiting for someone to push the blond interviewer who appears after every swimming event into the pool. Now, that would be a gold medal performance!