It’s hard to believe, but the summer is over. Not the brutally hot weather – that’s still around and will be for a couple more months in the ATL. But for my kids, it’s over. We picked the girls up at camp over the weekend and made the trek back home. They settled in pretty nicely, much better than the Boy. 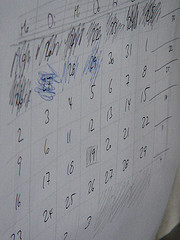 All three kids just loved their time away. We didn’t force the girls cold turkey back into their typical daily routine – we indulged them a bit. We looked at pictures, learned about color war (which broke right after the girls left) and will check the camp Facebook page all week. But for the most part we have a week to get them ready for real life. School starts on Monday and it’s back to work.

But while we think they are getting back into their life at home, they have really just started their countdown to camp in 2013. Basically, once we drove out of camp, they started the other 10 months of the year. Any of you who went to sleep-away camp as kids know exactly what I’m talking about. They are just biding the time until they get back to camp. It’s kind of weird, but as a kid that’s really how you think. At least I did. The minute I stepped on the bus to head home, I was thinking about the next time I’d be back in camp.

Now it’s even easier to keep a link to their camp friends over the other 10 months. XX1 was very excited to follow her camp friends on Instagram. We’re making plans to attend the reunion this winter. The Boss has been working with some of the other parents to get the kids together when we visit MD over the holidays. And I shouldn’t forget Words with Friends. I figure they’ll be playing with their camp friends as well, and maybe even learning something! Back in the olden days, I actually had to call my camp friends. And badger my Mom to take me to the Turkey Bowl in Queens Thanksgiving weekend, which was my camp’s reunion. It wasn’t until I got a car that I really stayed in touch with camp friends. Now the kids have these magic devices that allow them to transcend distance and build relationships.

For the Boss and me, these 10 months are when the real work gets done. But don’t tell them that. And we’re not just talking about school. Each year at camp all the kids did great with some stuff, and had other areas that need improvement. Besides schoolwork and activities, we will work with each child over the next 10 months to address those issues and strengthen the stuff they did well at camp. So they are primed and ready next June. Remember, camp is the precursor to living independently – first at college and later in the big leagues. They’ll screw things up, and we’ll work with them to avoid those mistakes next time.

It’s hard to get young kids to understand the big picture. We try, but it’s a process. They need to make mistakes and those mistakes are OK. Mistakes teach lessons, and sometimes those lessons are hard. All we ask of them is to work hard. That they strive to become better people – which means accepting feedback, admitting shortcomings, and doing their best. Basically to learn constantly and consistently, which we hope will serve them well when they start playing for real.

If we can get that message across over the next 10 months, we will have earned our 2 months of vacation.

Honan was admittedly an idiot for not having backups. But for most people, compromise of their most trusted email account (the one used for account recovery) is effectively game over. Being vulnerable to this attack makes him thoroughly normal—not a clown. I’m certain far less than 10% of Internet users could continue working through subversion of their most important email account.

The security failure here (different than the backup failure) is on Amazon’s & Apple’s parts. And apparently they are both recognizing this, halting or correcting the vulnerable procedures. Hopefully everybody will come up with new reasonable standards for proof of identification.