You will probably read this on Thursday or even Friday, and that’s late. This week got all screwed up. It’s a little matter of a bunch of things happening at the same time, mostly personal, all good. So Monday was a holiday for me and starts the fall renewal process where I don’t set goals and don’t worry about what I’m striving for any more. It also turns out Monday night was the Falcons home opener. Many of my ATL buddies consider me a sinner for going to a football game on the High Holy Days. As I told the Boss, “Football is my other religion,” so there was never a question whether I would go. 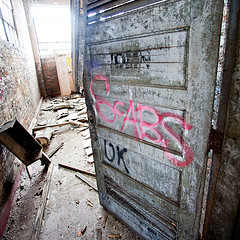 Normally I work late on Tuesday night, but we took XX2 to see a Ben Folds concert for her birthday. So up late Monday (I’ll get to that) and up late Tuesday. And a check-up for the kids Wednesday morning. Which means not a lot of time to actually, well, work. And I won’t even mention the road trip to go see the Giants play in Carolina on Thursday night. Yeah, I have a pretty sweet deal.

Now back to Monday night. Everyone was amped up for the game. The Broncos and their rebuilt QB, Peyton Manning, were in town. The atmosphere was electric. Until about midway through the first quarter, when the replacement refs lost control of the game. I mean totally lost control. I have never seen anything like it. Penalties were reversed or not called. Fights broke out. The ball was spotted wrong. The first quarter took over an hour. Monday Night Football didn’t end until Tuesday morning. NFL referees are like security folks. Until they are gone and all hell breaks loose, you don’t even notice them.

The NFL is taking a hard line about pensions, and they locked out the regular referees. I thought I had a sweet deal, but refs have it pretty good too. Some make as much as $120K a year to work maybe 20 games, including playoffs. Even based on the NFL’s latest offer, they’ll still get something like $15K contributed to retirement. But it’s not enough.

Everyone always wants more. So the NFL finds replacement refs, most of whom do a good enough job. Some don’t (like the team on the field in ATL on Monday night). But at the end of the day, Steve Young was right. The NFL is in an inelastic demand situation, and how cool is it that a Hall of Fame QB talks about Econ 101 on national TV? The NFL will take a hard line because the fans will continue to show up. And we will. I’ll bitch and moan to my pals. The football talking heads (which is actually a much bigger echo chamber than security) will bitch and moan. The fans will keep showing up. As evidenced by my upcoming road trip to Charlotte.

So the scabs will continue to be entrusted with keeping games on track and in control. Hopefully no one gets hurt and the games end fairly. Truth be told, scabs is a derogatory and unfair term for the replacement refs. It’s not their fault they are in deep water. It’s like taking a recent security graduate and asking them to defend something important from [name your favorite pen tester]. It’s going to end poorly.

Ultimately the real refs will cave. It’s all about the leverage. It’s always about the leverage. The real refs have none. The NFL continues to have record ratings and record attendance and record activity in the NFL ecosystem, even with replacement refs. And once the refs realize they are very small cogs in a multi-billion-dollar wheel, they will pull off the scabs and get back to work.

On the real-time fraud detection question, I have a more basic concern. Suppose when they send the automated authentication message you happen to be in a cellular dead zone or bad connection zone and don’t receive it? This is why I resisted Google’s two-phase ID system for quite a while. I happen to live and work in a spot which, because of the geography, gets lousy cell reception. I finally did sign up when Google moved Docs into Drive (I pretty much had to) but I worry about what will happen if they ever send one of those messages to me and I just don’t receive it for five minutes because of the spotty connectivity here.

There’s one additional part to that ref situation. They may be relatively bad now, but they will gain experience and get better. Sure, some will drop off as particularly bad and sacrificed, but they’ll improve and eventually plenty will be left who will be just as good as the regulars. I imagine the amount of growth these guys get from their first pro games through their third week is huge.