Every so often my mind wanders and I flash back to scenes from classic movies. When I remember Animal House, I can’t help but spend perhaps 15 minutes thinking about all the great scenes in that movie. I don’t even know where to begin, but one scene that still cracks me up after all these years is:

Boon: Jesus. What’s going on?
Hoover: They confiscated everything, even the stuff we didn’t steal.
Bluto: They took the bar! The whole f****** bar!
[Otter grabs a bottle of whiskey and throws it to Bluto, who chugs it all.]
Bluto: Thanks. I needed that.
Hoover: Christ. This is ridiculous. What are we going to do?
Otter & Boon: Road trip. 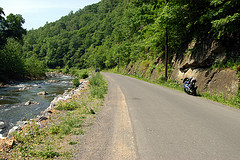 ROAD TRIP! Just the mere mention of those words makes me smile. Like most folks, I have great memories of the road trips I took in high school, college, as a recent graduate, and even now when my ATL buddies and I make a pilgrimage to go see a SEC football game every year. There isn’t much better than hopping in the car with a few buddies and heading to a different location, equipped with a credit card to buy decent drinks.

Though this past weekend I had a different kind of road trip. I took The Boy to go see the NY Giants play in Charlotte. After a crazy Saturday, we drove the 3.5 hours and even had dinner at Taco Bell on the way. He loves the Doritos shell tacos and since it was Boys weekend, we could suspend the rules of good eating for a day. We stayed at a nice Westin in downtown Charlotte and could see the stadium from our room. He was blown away by the hotel and the view of the stadium at night. It was great to see the experience through his eyes – to me a hotel is a hotel is a hotel.

We slept in Sunday morning, and when I asked him to shower before breakfast, he sent a zinger my way. “But Dad, I thought on Boys weekend we don’t have to shower.” Normally I would agree to suspend hygiene, but I had to sit next to him all day, so into the shower he went. We hit the breakfast buffet and saw a bunch of like-minded transplanted New Yorkers in full gear to see the Giants play. He got a new Giants hat on the walk to the stadium and we got there nice and early to see the team warm-ups and enjoy club level.

Of course, the game totally sucked. The G-men got taken to the woodshed. Normally I’d be fit to be tied – that was a significant investment in the hotel and tickets. But then I looked over and saw the Boy was still smiling and seemined happy to be there. He didn’t get pissed until the 4th quarter, after another inept Giants offensive series. He threw down the game program, but within a second he was happy again. I kept asking if he wanted to stay, and he didn’t want to go. We were there until the bitter end.

After the long trip home, as he was getting ready for bed, we got to do a little post-mortem on the trip. He told me he had a great time. Even better, he suggested we take road trips more often – like every weekend. Even though I didn’t have one drink and the Giants totally sucked, it was the best road trip I’ve ever taken. By far.