Our days just keep getting longer and longer. When the kids were younger afternoons and early evenings were a blur of activities, homework, hygiene, meals, reading, and then bed. Most nights the kids were in bed by 8:30 and the Boss and I could eat in peace, watch a little TV, catch up, and basically take a breath. But since XX1 entered middle school, things have changed. The kids have adapted fine. The Boss and me, not so much. 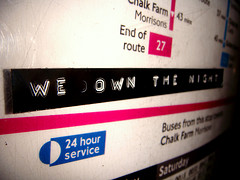 Now it’s all about dividing and conquering. I handle the early shift and get the twins ready for school. They are on the bus by 7:20 and then I usually head over to some coffee shop and start working. The Boss handles XX1 and has her on the bus at 8:10, and then she starts her day of working through all the crap that has to happen to keep the trains running.

The twins get off the bus at 3pm or so. Then it’s homework time and shuttling them off to activities. XX2 isn’t home until 4:30; then some days she can get an hour or two of work in, and other days she can’t. Inevitably she gets home from dance and has to start her homework. She usually wraps up around 10, but I usually get enlisted to help with the writing or math. And there are nights when XX1 is up until 11 or even later trying to get everything done.

So there is no peace and quiet. Ever. We find ourselves staying up past midnight because those 90 minutes after all the kids go to bed are the only time we have to catch up and figure out the logistics for the next day. Which assumes that I don’t have work I need to get done.

I know Rich has it harder right now with his 2 (and soon to be 3) kids under 4. I remember those days, and don’t miss the sleep deprivation. And I’m sure he misses sleeping in on weekends. At least I get to do that – our kids want us to sleep as late a possible, so they can watch more crappy shows on Nick Jr. But I do miss the quiet evenings after the kids were sleeping. Those are likely gone for a little while. For the next 9 years or so, the kids own the night.

Photo credits: We Own The Night originally uploaded by KJGarbutt