Network-based Malware Detection 2.0: The Network’s Place in the Malware Lifecycle

As we resume our Network-based Malware Detection (NBMD) 2.0 series, we need to dig into the malware detection/analysis lifecycle to provide some context on where network-based malware analysis fits in, and what an NBMD device needs to integrate with to protect against advanced threats. We have already exhaustively researched the malware analysis process. The process diagram below was built as part of Malware Analysis Quant. 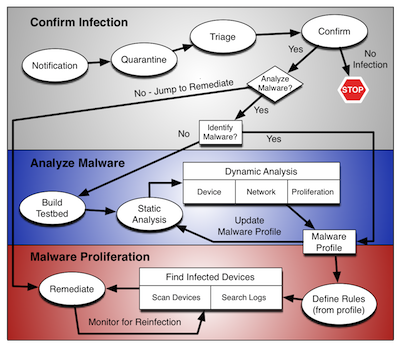 Looking at the process, NBMD provides the analyze malware activity phase – including building the testbed, static analysis, various dynamic analysis tests, and finally packaging everything up into a malware profile. All these functions occur either on the device or in some cloud-based sandbox for analyzing malware files. That is why scalability is so important, as we discussed last time. You basically need to analyze every file that comes through because you cannot wait for an employee’s device to be compromised before starting the analysis.

Some other aspects of this lifecycle bear mentioning:

Before we can dig into these two points we need to point out some other relevant research on these topics for additional context. The Securosis Data Breach Triangle shows a number of opportunities to interrupt a data breach. You can either protect the data (very hard), detect and stop the exploit, or catch the data with egress filtering. Success at any one of these will stop a breach. But putting all your eggs in one basket is unwise, so work on all three.

For specifics on detecting and stopping exploits, refer to our ongoing CISO’s Guide to Advanced Attackers – particularly Breaking the Kill Chain, which covers stopping an attack. Remember – even if a device is compromised, unless critical data is exfiltrated it’s not a breach. The best case is to detect the malware before it hurts anything – NBMD is very interesting technology for this – but you also need to rely heavily on your incident response process to ensure you can contain the damage.

As with most detection activities, accuracy is critical. A false positive – incorrectly flagging a file as malware – disrupts work and wastes resources investigating a malware outbreak that never happened. You need to avoid these, so put a premium on accuracy. False negatives – missing malware and letting it through – are at least as bad.

So how can you verify the accuracy of an NBMD device? There is no accepted detection accuracy benchmark so you need to do some homework. Start by asking the vendor tough questions to understand their threat intelligence and threat research capabilities. Read their threat research reports and figure out whether they are on the leading edge of research, or just a fast follower using other companies’ research innovations.

Malware research provides the data for malware analysis, whether on the device or in the cloud. So you need to understand the depth and breadth of a vendor’s research capability. Dig deep and understand how many researchers they have focused on malware analysis. Learn how they aggregate the millions of samples in the wild to isolate patterns using fancy terms like big data analytics. Study and understand how they turn that research into detection rules and on-device tests.

You will also want to understand how the vendor shares information with the broader security research community. No one company can do it all, so you want leadership and a serious investment in research, but you also need to understand how they collaborate with other groups and what alternative data sources they leverage for analysis. For particularly advanced malware samples, do they have a process to undertake manual analysis?

Be sensitive to research diversity. Many NBMD devices use the same handful of threat intelligence services to populate their devices. That makes it very difficult to get intelligence diversity to detect fast-moving advanced attacks. Make sure you check out lab tests of devices to compare accuracy. These tests are all flawed – it is just barely theoretically possible to accurately model a real-world environment using live ammunition (malware), but things would immediately change. But these tests can be helpful for an apples-to-apples device comparison.

As part of a proof of concept, you may also want to route your ingress traffic through 2 or 3 of these devices in monitoring mode, to test relative accuracy and scalability on real traffic. That should give you a good indication of how well the device will perform for you.

Finally, leverage “The 2nd Derivative Effect (2DE)” of malware analysis. When new malware is found, profiled, and determined to be bad, there is an opportunity to inoculate all the devices in use. This involves uploading the indicators, behaviors, and rules to identify and block it to a central repository; and then distributing that intelligence back out to all devices. The network effect in action. The more devices in the network, the more likely the malware will show up somewhere to be profiled, and the better your chance of being protected before it reaches you. Not always, but it’s is as good a plan as any.

It sucks to be the first company infected – you miss the attack on its way in. But everyone else in the network benefits from your misfortune. This ongoing feedback loop requires extensive automation (with clear checks and balances to reduce bad updates) to accelerate distribution of new indicators to devices in the field.

Plan B (When You Are Wrong)

Inevitably you will be wrong sometimes, and malware will get through your perimeter. That means you will need to rely on the other security controls in your environment. When they fail you will want to make sure you don’t get popped by the same attack over and over again. This requires some integration between the NBMD device and the other controls in your environment (including endpoint protection) to block indicators discovered through incident response. Advanced malware detection requires an integrated and coordinated response, with multiple levels of security controls.

Finally, you need to ensure sufficient egress filtering, in hopes of breaking the third leg of the Data Breach Triangle (exfiltration). But we don’t want to put the cart in front of the malware horse, so we will defer this to our next post, when we talk about deployment options and choosing rules for ingress and egress protection.