New Paper: The Future of Security The Trends and Technologies Transforming Security

This paper originally started with a blog post called Inflection. Sure, many of our papers start as a series of posts, but this time the post came long before I thought of a paper. I started seeing a bunch of interrelated trends, and what appeared to be some likely unavoidable outcomes. Unlike most predictive pieces, I focused as much on inherent security trends as on disruptive forces. Less “new attacks” and more “new ways we are doing things”.

The research continued, but I never expected a chance to write it up as a paper.

Out of nowhere the folks at Box contacted me to see if I had an interest in writing up and licensing something on where security is headed. I pointed them toward Inflection, and it hit exactly what they were looking for. So I got a chance to pull together the additional research I have been thinking about since that post back in 2012, and compile everything into a paper. As an analyst it isn’t often I get a chance to focus on far-field research, so I am excited to get this one out the door.

This paper is also being co-released by the Cloud Security Alliance, who reviewed and approved its findings.

I hope you find it useful, and please keep in mind that everything I discuss is in practice someplace today, but I expect it to take ten or more years for these practices to become widespread and their full implications to kick in. 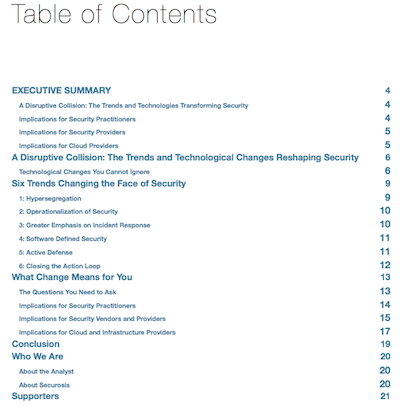 As allways, a very good paper.
Let me just make an observation about the PDF: the links to other papers were not saved or they are not working.