This has always been one of my favorite posts, and it is one I still use regularly. I even have a slide on it in my RSA presentation for this week.

The triangle still guides a lot of my thinking on data security. I am also now starting to think in terms of workload security, about which you will be hearing more soon. In this age of increased focus on egress filtering and incident response, I think the triangle does a good job of capturing a direction many security professionals realize we need to head. 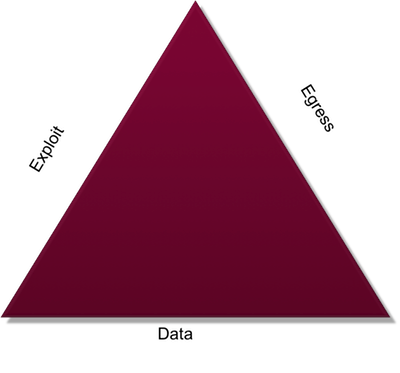 Egress is the one I see *violently* mishandled so often… with me grabbing my head and wailing “The 1990s are oooooooooooover!!! why - oh - why are you doing it like this!?”

This is one of the most important posts on the Securosis blog. I used the triangle in my plans for the Information-centric security plan I put together for my last employer. (I “borrowed” that term too). The triangle was actually in the RFQ that was used for quotes for to test the “data” and “egress” parts of our network. So well done.

I think that the triangle is a bit too simple. I prefer the steps in Appendix B of Mandiant’s APT1 report being:
1. Compromise
2. Foothold
3. Escalate
4. Recon
5. Lateral Move
6. Maintain Presence
7. Complete Mission

Of these, I think that recon and lateral movement are important and not covered in the triangle model.

Considering that APT1 was moving Gigs of information out of organisations… my analogy is trying to stop an ant coming into your house (difficult) but ignoring an ant colony taking all your food out of your house (stupid).