What ever happened to the human touch? And personal service? Those seem to be hallmarks of days gone by. It’s too bad. Since I don’t like people, I tend not to develop relationships with my bankers or pharmacists or clergy – or pretty much anyone, come to think of it. But I guess a lot of other people did and they likely miss that person to person interaction.

Why do I bring this up? On my journey to the Northern regions earlier this summer, I passed through Washington DC on our way to the beach in Delaware. I hardly even remember that section of the journey, but evidently I left a bit of an impression – with an automated speed trap. Yes, it was a good day when I opened my mail and saw a nice little letter from the DC Government requesting $150 for violating their speed laws. The picture below is how they explain the technology.

I remember the good old days when if you got caught speeding, you knew it. You have the horror of the flashing lights in your rear view mirror. There was the thought exercise of figuring out what story would perhaps provide a warning and not a ticket. The indignity of sitting on the side of the road as the officer did whatever officers do for 20 minutes. Maybe making sure you aren’t a convicted felon, driving in a stolen vehicle, or sexting with someone. There was none of that. Just an Internet site requesting my money.

And that’s the reality of the situation. The way I understand it, speeding laws got enacted for safety purposes, right? It’s dangerous to go 120 mph on a highway (ask Tyreke Evans). But this has nothing to do with safety. This is a shakedown, pure and simple. DC may as well just put a toll booth on the 14th Street bridge and collect $150 from everyone who crosses.

Of course, I consulted the Google to figure out whether I could beat the citation – hoping for a precedent that the tickets don’t hold up under scrutiny. Could I could claim I wasn’t driving the car, or raise vague uncertainties about the technology? Not so much. There were a few examples, but none were applicable to my situation. The faceless RoboCop got me. 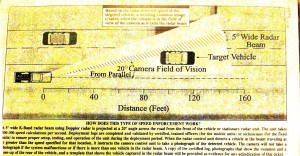 I’m glad these machines weren’t around when I was a kid. Can you imagine how much fun Smokey and the Bandit would have been if Buford T. Justice used one of these automated speed traps? The Bandit would have gotten his cargo to the destination with nary a car chase. The biggest impact would have been a few traffic citations waiting in his mailbox when he returned. I suspect that wouldn’t have gotten many folks to the theaters.

Last week we welcomed Gunnar Peterson as a Contributing Analyst and we are stoked. But we aren’t done yet, so keep an eye on the blog and Twitter toward the end of the week for more fun. Suffice it to say we’ll need to increase our beer budget for the next Securosis all-hands meeting.