Why Successful Risk Management is Still a Failure

Thanks to my wife’s job at a hospital, yesterday I was able to finally get my H1N1 flu shot. While driving down, I was also listening to a science podcast talking about the problems when the government last rolled out a big flu vaccine program in the 1970s. The epidemic never really hit, and there was a much higher than usual complication rate with that vaccine (don’t let this scare you off – we’ve had 30 years of improvement since then). The public was justifiably angry, and the Ford administration took a major hit over the situation. 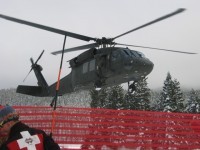 Recently I also read an article about the Y2K “scare”, and how none of the fears panned out. Actually, I think it was a movie review for 2012, so perhaps I shouldn’t take it too seriously.

In many years of being involved with risk-based careers, from mountain rescue and emergency medicine to my current geeky stuff, I’ve noticed a constant trend by majorities to see risk management successes as failures. Rather than believing that the hype was real and we actually succeeded in preventing a major negative event, most people merely interpret the situation as an overhyped fear that failed to manifest. They thus focus on the inconvenience and cost of the risk mitigation, as opposed to its success.

Y2K is probably one of the best examples. I know of many cases where we would have experienced major failures if it weren’t for the hard work of programmers and IT staff. We faced a huge problem, worked our assess off, and got the job done. (BTW – if you are a runner, this Nike Y2K commercial is probably the most awesomest thing ever.)

This behavior is something we constantly wrestle with in security. The better we do our job, the less intrusive we (and the bad guys) are, and the more invisible our successes. I’ve always felt that security should never be in the spotlight – our job is to disappear and not be noticed. Our ultimate achievement is absolute normalcy.

In fact, our most noticeable achievements are failures. When we swoop in to clean up a major breach, or are dangling on the end of a rope hanging off a cliff, we’ve failed. We failed to prevent a negative event, and are now merely cleaning up.

Successful risk management is a failure because the more we succeed, the more we are seen as irrelevant.

Since we usually don’t have good metrics, we can’t *prove* that what we are doing is reducing risk, and we can’t quantify the benefits of reducing that risk.  This sets us up for failure.

Unfortunately, there are no magic wands for measuring risk, measuring the effectiveness of risk-reduction, and measuring the costs avoided by reducing those risks.  We have bits and pieces.  Sometimes the costs of measurement exceed the benefits.

Lots of open research questions here.  I doubt these problems will be solved soon, and maybe not at all.