I’m pretty lucky – my most recent memories of a long commute were back in 1988, when I worked in NYC during my engineering co-op in college. It was miserable. Car to bus to train, and then walk a couple blocks through midtown to the office. It made me old when I was young. I only did it for 6 months, and I can’t imagine the toll it takes on folks who do it every day for decades. 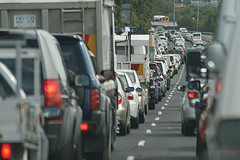 Today you can be kind of productive while commuting, which is different than in the late 80s. There are podcasts and books on tape, and if you take aboveground public transportation, you can get network connectivity and bang through your email and social media updates before you even get to the office. But it still takes a toll. Time is not your own. You are at the mercy of traffic or mass transit system efficiency.

I was recently traveling to see some clients (and doing some end-of-year strategy sessions), and the first day it took me over 90 minutes to go 35 miles. For some reason I actually left enough time to get there and didn’t screw up my day by being late for my first meeting. Getting back to my hotel for a dinner meeting took another hour. I was productive, making calls and the like. And amazingly enough, I didn’t get pissy about the traffic or the idiocy I saw on the roads. I had nowhere else to be, so it was fine.

The next day was more of the same. I was able to leave after the worst of rush hour, but it still took me 65 minutes to go 40 miles. A lot of that was stop and go. I started playing my mental games, pretending the highway was a football field and looking for openings to squeeze through. Then I revisited my plans for world domination. Then I went back in time to remember some of my favorite football games. Then I got around to preparing for the meeting a bit. So again, I didn’t waste the time, but I don’t commute very often at all.

So when I was on my way to the airport Monday morning again, and it took me 65 minutes to get there, I was running out of things to think about. 3 long commutes in less than a week took its toll. How many times can you take over the world? How many meetings can you mentally prepare for, knowing whatever I decide to do will be gone from my frontal cortex before I board the plane? Then I revisited my unwritten spy thriller novel. The plot still needs work, especially because I forgot all the great ideas I had during the commute. Ephemeral thoughts for the win.

So when my father in law expressed a desire to stop commuting into Washington DC and move to an office closer to his home we were very supportive. Not just because he really shouldn’t be driving anywhere (he is 80 años, after all), but also he seems to have finally realized that he could have been talking to clients during the 60-90 minutes he spent in the car each way every day for the past 35 years. I’m decent at math, but I’m not going to do that calculation and I’m certainly not going to put a dollar figure on an opportunity cost comparable to the GDP of a small Central American nation.

Which means the next time my biggest morning decision is which coffee shop to set up at for the day, I will be grateful that I have the flexibility to spend my time working. Not commuting.

What CISOs Need to Know about Cloud Computing

Defending Against Application Denial of Service