If you want a feel for how long 80 years is, here are a few facts. In 1933, the President was Herbert Hoover until March, when FDR became President. The Great Depression was well underway in the US and spreading around the world. Hitler first rose to power in Germany. And Prohibition was repealed in the US. I’ll certainly drink to that. 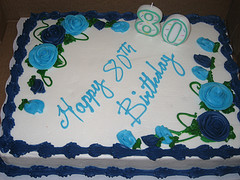 Some famous folks were born in 1933 as well. Luminaries such as Joan Collins, Larry King, and Yoko Ono. Have you seen Larry or Yoko lately? Yeah, 80 seems pretty old. Unless it’s not. My father-in-law turned 80 this year. In fact his birthday was yesterday and he looks a hell of a lot better than most 80-year-olds. He made a joke at his birthday party over the weekend that 80 is the new 60. For him it probably is.

He has been both lucky and very healthy. We all think his longevity can be attributed to his outlook on life. He has what we call jokingly _the Happy Gene.. In the 20 years I have been with the Boss I have seen him mad twice. Twice. It’s actually kind of annoying – I probably got mad twice already today. But the man is unflappable. He’s a stockbroker, and has been for 35 years, after 20 years in retail. Stocks go up, he’s cool. Stocks go down, he’s cool. Clients yell at him, he’s cool. He just doesn’t get bent out of shape about anything.

He does get fired up about politics, especially when I intentionally bait him, because we see things from opposite sides. He gets excited about baseball and has been known to scream at the TV during Redskins games. But after the game is done or the discussion is over, he’s done. He doesn’t hold onto anger or perceived slights or much of anything. He just smiles and moves on.

It is actually something I aspire to. The Boss said a few words at his party and summed it up perfectly. She had this entire speech mapped out, but when I heard her first sentence I told her to stop. It’s very hard to sum up a lifestyle and philosophy in a sentence, but she did it. And anything else would have obscured the beauty of her observation.

That’s it. That’s exactly what he does, and it has worked great for 80 years. It seems so simple yet it’s so hard to do. So. Hard. To. Do. But for those, like my father-in-law, who can master worrying less… a wonderful life awaits. Even when it’s not so wonderful. Happy Birthday, Sandy. I can only hope to celebrate many more.