It’s really funny and gratifying to see your kids growing up. Over the weekend XX1 took her first solo plane trip. I checked her in as an unaccompanied minor, and she miraculously got TSA Pre-check. Of course that didn’t mean I did with my gate pass. So the TSA folks did their darndest to maintain the security theater, and swabbed my hands and feet.

We had some time so I figured we’d hang out in the airline club. Not so much. I have access to the SkyClub via my AmEx Platinum card, but evidently I have to be flying. So we got turned away at the door. Really? Total fail, Delta. And your club receptionist was mean. But I had XX1 with me, so I mumbled some choice words under my breath and just let her mention that person wasn’t nice.

Then the gate agent called for her, and after a quick goodbye… Okay, not so quick – no goodbye is quick with XX1 – she headed down the jetway and was gone. Of course I got dispatches every 10 minutes or so via text. So I knew when her bag was in the overhead bin, when she got a refreshment, how much she was enjoying Tower Heist on the iPad, when the plane was loaded, and finally when she had to shut down her phone. She made it to her destination in one piece, and met Grandma at the gate. Another milestone achieved. 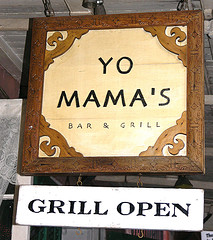 Then on Saturday morning I had the pleasure of taking the boy to breakfast. His sports activities (tennis and LAX) weren’t until afternoon so we had some boy time. As we were chatting I asked him about his friends. He then launched into a monologue about how all his friends tell Yo Mama! jokes now. He even had some pretty funny ones ready to go. He asked me if I had heard of those kinds of jokes. I just had to chuckle. You know those kids today – they invented everything.

Though how they get their material is radically different. It seems they get the jokes on YouTube and then tell them to each other the next day at school. I had to actually read joke books to get my material and my delivery wasn’t very good. It seems to be in good fun, for now. I remember getting into fights with kids over those kinds of jokes, mostly because they weren’t really intended to be joking. And it’s a bit strange to think the Boss is the Mama in question, and at some point he may need to defend her honor. Although the Boy is pretty mild-mannered and very popular, so it’s hard to envision someone telling a joke to get a rise out of him.

All the same, the kids are growing up. And unaccompanied plane rides and Yo Mama! jokes are all part of the experience.

In case any of you missed it, we published our fifth RSA Conference Guide. Yes, we do mention the conference a bit, but it’s really our ideas about how security will shake out in 2014. You can get the full guide with all the memes you can eat.