June is a special time for us. School is over and we take a couple weeks to chill before the kids head off to camp. Then we head up to the Delaware beach where the Boss and I met many moons ago, and then put the kids on the bus to sleepaway camp. This year they are all going for 6 1/2 weeks. Yes, it’s good to be our kids. We spend the rest of the summer living vicariously through the pictures we see on the camp’s website. 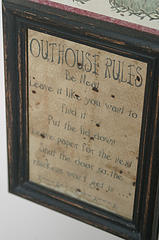 The title of today’s Incite has a double meaning. Firstly, camp does rule. Just seeing the kids renew friendships with their camp buddies at the bus stop and how happy they are to be going back to their summer home. If it wasn’t for all these damn responsibilities I would be the first one on the bus. And what’s not to love about camp? They offer pretty much every activity you can imagine, and the kids get to be pseudo-independent. They learn critical life lessons that are invaluable when they leave the nest. All without their parents scrutinizing their every move. Camp rules!

But there are also rules that need to be followed. Like being kind to their bunkmates. Being respectful to their counselors and the camp administrators. Their camp actually has a list of behavioral expectations we read with the kids, which they must sign. Finally, they need to practice decent hygiene because we aren’t there to make sure it happens.

For the girls it’s not a problem. 3 years ago, when XX1 came back from camp, she was hyper-aware of whether she had food on her face after a meal and whether her hair looked good. Evidently there was an expectation in her bunk about hygiene that worked out great. XX2 has always been a little fashionista and takes time (too much if you ask me) for her appearance, so we know she’ll brush her hair and keep clean. We look forward to seeing what new look XX2’s going with in the pictures we see every couple of days.

The Boy is a different story. At home he needs to be constantly reminded to put deodorant on, and last summer he didn’t even know we packed a brush for his hair. Seriously. He offered a new definition for ‘mophead’ after a month away. Being proactive, I figured it would be best if I laid out the camp rules very specifically for the Boy. So in the first letter I sent him I reminded him of what’s important:

Here is my only advice: Just have fun. And more fun. And then have some additional fun after that. That’s your only responsibility for the next 6 1/2 weeks. And you should probably change your underwear every couple of days. Also try not to wear your Maryland LAX shorts every day. Every other day is OK…

The Boss thought it was pretty funny until she realized I was being serious. Boys will be boys – even 44-year-old boys…