I spend a lot of time in public places. I basically work in coffee shops and spend more than my fair share of time in airports and restaurants. There is nothing worse than being in the groove, banging out a blog post, and then catching a whiff of someone – before I can see them. I start to wonder if the toilet backed up or something died in the wall. 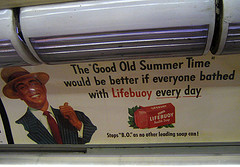 Then I look around the coffee shop and notice the only open table is next to you. no. No. NO. Yes, the sticky dude sits right next to you. Now I’m out of my productivity zone and worried about whether the insides of your nostrils are totally burned out. Sometimes I’m tempted to carry some Tiger Balm with me, just to put under my nose when in distress. Yes it would burn like hell, but that’s better than smelling body odor (BO) for the next couple of hours.

It’s not just BO. How about those folks that bathe in stinky perfume? Come on Man! The Boy had a tutor once that just dumped old lady perfume on. I wonder if she thought we were strange because we had all the windows in the house open in the middle of winter. Finally the Boss had to tell her the perfume was causing an allergic reaction. Seems we’re all allergic to terrible perfume.

I just don’t get it. Do these folks not take a minute to smell their shirt before they emerge from the house? Do they think the smell of some perfumes (like the scent that smells like blood, sweat and spit) is attractive or something? Do they have weak olfactory senses? Do they just not care? I know some cultures embrace natural human smells. But not the culture of Mike. If you stink, you should bathe and wear clean clothes. If you leave a trail of scent for two hours after you leave, you may be wearing too much perfume. There’s got to be a Jeff Foxworthy joke in there somewhere.

What should I do? There are no other tables available in the coffee shop. I could throw in the towel and move to a different location. I could suggest to the person they are hygienically challenged and ask them to beat it. I could go all passive aggressive and tattle to the barristas, and ask them to deal with it. Maybe I’ll get one of those nose clips the kids wear when swimming to keep my nostrils closed. But I’ll do none of the above.

What I’ll do is sit there. I won’t be chased away by some smelly dude. I mean, I paid my $2.50 to sit here as long as I want. So I pull the cover off my coffee and take a big whiff of java every 10 seconds or so to chase away the stench. By the way, it’s hard to type when you are inhaling coffee fumes. It’s unlikely I’ll get a lot done, but I have no where else to be, I can just wait it out.

Which is stupid. My ridiculous ego won’t accept that body odor is likely covered under the 1st Amendment, so I couldn’t make the guy leave even if I wanted to. I’ll suffer the productivity loss to prove nothing to no one, instead of hitting another of the 10 coffee shops within a 5 mile radius of wherever I am. Thankfully I have legs that work and a car that drives. I can just go somewhere else, and I should.

Now when the stinky dude occupies the seat next to you on a 7 hour flight, that’s a different story. There is no where to go, but 30,000 feet down. In that case, I’ll order a Jack and Coke, even at 10 in the morning. I’ll accidentally spill it. OOPS. You have to figure the waft of JD > BO every day of the week.