To finish off this research it’s time to show what some of this looks like. Here are some practical design patterns based on projects we have worked on. The examples are specific to Amazon Web Services and Microsoft Azure, rather than generic templates. Generic patterns are less detailed and harder to explain, and we would rather you understand what these look like in the real world.

This is a simplified example of a public network on Azure. All the components run on Azure, with nothing in the enterprise data center, and no VPN connections. Management of all assets is over the Internet. We can’t show all the pieces and configuration settings in this diagram, so here are some specifics: 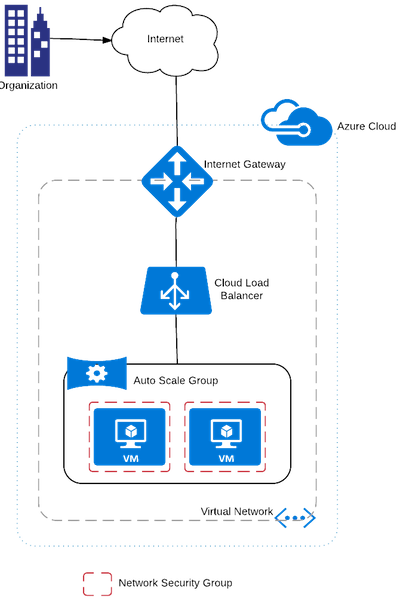 There is more, but this pattern produces a hardened server, with no administrative traffic, protected with both Azure’s default protections and Network Security Groups. Note that on Azure you are often much better off using their PaaS offerings such as web servers, instead of manually building infrastructure like this.

Amazon works a bit differently than Azure (okay – much differently). This example is a Virtual Private Cloud (VPC, their name for a virtual network) that is completely private, without any Internet routing, connected to a data center through a VPN connection.

This builds on our previous examples. In this case the web servers and app servers are separated, with app servers on a private subnet. We already explained the components in our other examples, so there is only a little to add: 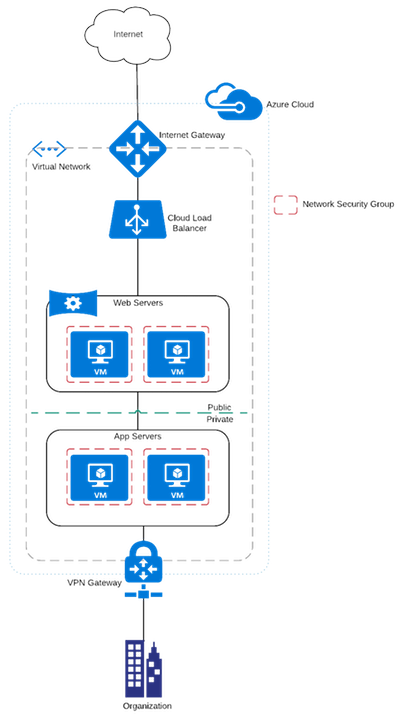 Our last example shows how to use some of the latest features of Amazon Web Services to create a new cloud-native design for big data transfers and analytics.

Think about what we have described: the analysis servers have no Internet access, spin up only as needed, and can only read in new data and write out results. They automatically terminate when finished, so there is no persistent data sitting unused on a server or in memory. All Internet-facing components are native Amazon services, so we don’t need to maintain their network security. Everything is extremely cost-effective, even for very large data sets, because we only process when we need it; big data sets are always stored in the cheapest option possible, and automatically shifted around to minimize storage costs. The system is event-driven so if you load 5 jobs at once, it runs all 5 at the same time without any waiting or slowdown, and if there are no jobs the components are just programmatic templates, in the absolute most cost-effective state.

This example does skip some options that would improve resiliency in exchange for better network security. For example we would normally recommend using Simple Queue Service to manage the jobs (Lambda would send them over), because SQS handles situations such as an instance failing partway through processing. But this is security research, not availability focused.

This research isn’t the tip of the iceberg; it’s more like the first itty bitty little ice crystal on top of an iceberg, which stretches to the depths of the deepest ocean trench. But if you remember the following principles you will be fine as you dig into securing your own cloud and hybrid deployments:

Don’t be intimidated by cloud computing, but don’t think you can or should implement network security the way you always have. Your skills and experiences are still important, and provide a base to build on as you learn all the new options available within the cloud.