It’s definitely a presidential election year here in the US. My Twitter and Facebook feeds are overwhelmed with links about what this politician said and who that one offended. We get to learn how a 70-year old politician got arrested in his 20s and why that matters now. You also get to understand that there are a lot of different perspectives, many of which make absolutely no sense to you. Confirmation bias kicks into high gear, because when you see something you don’t agree with, you instinctively ignore it, or have a million reasons why dead wrong. I know mine does.

Some of my friends frequently share news about their chosen candidates, and even more link to critical information about the enemy. I’m not sure whether they do this to make themselves feel good, to commiserate with people who think just like them, or in an effort to influence folks who don’t. I have to say this can be remarkably irritating because nothing any of these people posts is going to sway my fundamental beliefs. 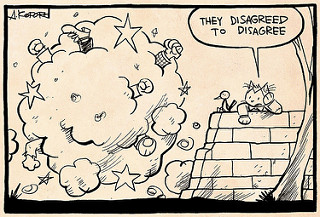 That got me thinking about one of my rules for dealing with people. I don’t talk about religion or politics. Unless I’m asked. And depending on the person I might not engage even if asked. Simply because nothing I say is going to change someone’s story regarding either of those two third rails of friendship. I will admit to scratching my head at some of the stuff people I know post to social media. I wonder if they really believe that stuff, or they are just trolling everyone.

But at the end of the day, everyone is entitled to their opinion, and it’s not my place to tell them their opinion is idiotic. Even if to it is. I try very hard not to judge people based on their stories and beliefs. They have different experiences and priorities than me, and that results in different viewpoints. But not judging gets pretty hard between March and November every 4 years. At least 4 or 5 times a day I click the unfollow link when something particularly offensive (to me) shows up in my feed.

But I don’t hit the button to actually unfollow someone. I use the fact that I was triggered by someone as an opportunity to pause and reflect on why that specific headline, post, link, or opinion bothers me so much. Most of the time it’s just exhaustion. If I see one more thing about a huge fence or bringing manufacturing jobs back to the US, I’m going to scream. I get these are real issues which warrant discussion. But in a world with a 24/7 media cycle, the discussion never ends.

I’m not close-minded, although it may seem that way. I’m certainly open to listening to other candidates’ views, mostly to understand the other side of the discussion and continually refine and confirm my own positions. But I have some fundamental beliefs that will not change. And no, I’m not going to share them here (that third rail again!). I know that rational people can disagree, and that doesn’t mean I don’t respect them, or that I don’t want to work together or hang out and drink beer. It just means I don’t want to talk about religion or politics.