I mentioned back in January that XX1 has gotten her driver’s permit and was in command of a two ton weapon on a regular basis. Driving with her has been, uh, interesting. I try to give her an opportunity to drive where possible, like when I have to get her to school in the morning. She can navigate the couple of miles through traffic on the way to her school. And she drives to/from her tutor as well, but that’s still largely local travel.

Though I do have to say, I don’t feel like I need to run as frequently because the 15-20 minutes in the car with her gets my heart racing for the entire trip. Obviously having been driving for over 30 years, I see things as they develop in front of me. She doesn’t. So I have to squelch the urge to say, “Watch that dude over there, he’s about to change lanes.” Or “That’s a red light and that means stop, right?” Or “Hit the f***ing brakes before you hit that car, building, child, etc.”

She only leveled a garbage bin once. Which caused more damage to her ego and confidence than it did to the car or the bin. So overall, it’s going well. But I’m not taking chances, and I want her to really understand how to drive. So I signed her up for the B.R.A.K.E.S. teen defensive driver training. Due to some scheduling complexity taking the class in New Jersey worked better. So we flew up last weekend and we stayed with my Dad on the Jersey Shore.

First, a little digression. When you have 3 kids with crazy schedules, you don’t get a lot of individual time with any of the kids. So it was great to spend the weekend with her and I definitely got a much greater appreciation for the person she is in this moment. As we were sitting on the plane, I glanced over and she seemed so big. So grown up. I got a little choked up as I had to acknowledge how quickly time is passing. I remember bringing her home from the hospital like it was yesterday. Then we were at a family event on Saturday night with some cousins by marriage that she doesn’t know very well. To see her interact with these folks and hold a conversation and be funny and engaging and cute. I was overwhelmed with pride watching her bring light to the situation.

But then it was back to business. First thing Sunday morning we went over the race track. They did the obligatory video to scare the crap out of the kids. The story of B.R.A.K.E.S. is a heartbreaking one. Doug Herbert, who is a professional drag racer, started the program after losing his two sons in a teen driving accident. So he travels around the country with a band of other professional drivers teaching teens how to handle the vehicle. 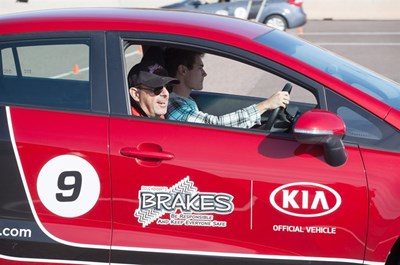 The statistics are shocking. Upwards of 80% of teens will get into an accident in their first 3 years of driving. 5,000 teen driving fatalities each year. And these kids get very little training before they are put behind the wheel to figure it out.

The drills for the kids are very cool. They practice accident avoidance and steering while panic breaking. They do a skid exercise to understand how to keep the car under control during a spin. They do slalom work to make sure they understand how far they can push the car and still maintain control. The parents even got to do some of the drills (which was very cool.) They also do a distracted driving drill, where the instructor messes with the kids to show them how dangerous it is to text and play with the radio when driving. They also have these very cool drunk goggles, which simulates your vision when under the influence. Hard to see how any of the kids would get behind the wheel drunk after trying to drive with those goggles on.

I can’t speak highly enough about the program. I let XX1 drive back from the airport and she navigated downtown Atlanta, a high traffic situation on a 7 lane highway, and was able to avoid an accident when a knucklehead slowed down to 30 on the highway trying to switch lanes to make an exit. Her comfort behind the wheel was totally different and her skills were clearly advanced in just the four hours. If you have an opportunity to attend with your teen, don’t think about it. Just do it. Here is the schedule of upcoming trainings, and you should sign up for their mailing list.

The training works. They have run 18,000 teens through the program and not one of them has had a fatal accident. That’s incredible. And important. Especially given my teen will be driving without me (or her Mom) in the car in 6 months. I want to tip the odds in my favor as much as I can.