The NFL has had a tough week. The Ray Rice stuff I mentioned last week. And uber-running-back Adrian Peterson deactivated on Sunday, due to a child abuse indictment. The stories are terrible, especially given that NFL players are explosive athletes and trained in violence. No kid or spouse has a chance in the face of an angry NFL player. And no, I’m not going to anywhere near Floyd Mayweather on this topic.

Peterson’s excuse was that he was just disciplining his 4 year old, just as he was disciplined as a child. With a switch, which is evidently a thin tree branch. Of course we are hearing about switches and abusers because these high-profile athletes make millions a year. They are human. They make mistakes, regardless of their bankrolls. And like everyone else (including you and m), they are defined by their experiences. I’m not making excuses – what they have done is not really excusable. 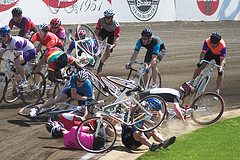 But the real point isn’t about suspending or pushing Adrian Peterson, Ray Rice, Greg Hardy, or Ray McDonald out of the league. It is about trying to figure out how to break the cycle. Many of these people grew up in abusive environments. That is all they know, and they think it is the way to get results. Peterson’s public statement indicates he has worked with a counselor to learn other techniques for disciplining children. That’s good to hear. It doesn’t heal the scars on his son’s legs or psyche, but it’s a start.

No one teaches you how to be a parent. There is no curriculum. There are no training courses, besides child CPR and maybe changing a diaper. You figure things out. You do what you think is right. If you don’t like how you grew up, maybe you decide to do things differently. Or maybe you do the same because that’s all you know.

Abuse of any kind is terrible and exacts a toll over generations. Yes, we should punish those responsible, but we also need to address the root causes if we want to change anything. That requires education and support for parents at risk of abuse. Given the prevalence of online education and training, there is a better way to do this, and the Internet is a part of the answer. At some point someone will figure it out, and we’ll all be better for it.

Until then you can only feel bad for the people (especially kids) on the other end of the switch.