Wasn’t it just yesterday that we put XX1 on the bus for her first day of kindergarten? I guess if yesterday was August of 2006, that would be correct. Man, six years have gone by fast! On Friday she moves up to Middle School. As we watched the annual Field Day festivities with all the kids dressed up in their countries’ garb yesterday, the kindergartners seemed so small. And they are. Six years doesn’t seem so long, but against the growth of such a child it’s a lifetime. 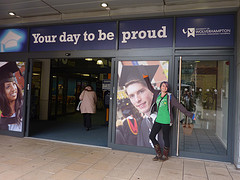 I have to say I’m proud of my oldest girl. She did very well in elementary school, and is ready to tackle 7 different teachers and a full boat of advanced classes next year. Of course there will be stumbles and challenges and other learning experiences. As my army buddies say, “she has an opportunity to excel.” Despite our desire to make time slow down, it’s not going to happen. She’s ready for the next set of experiences and to continue on her path. Whether we like it or not. Whether we are ready or not.

We have heard story after story about how difficult middle school is, especially for girls. Between raging hormones, mean girls, and a much heavier course load, it requires a lot of adjustment. For all of us. It seems XX1 will have to learn organizational skills and focus a lot earlier than I had to. I kind of coasted until I got to college, and then took a direct shot upside the head from the clue bat, when I learned what it took to thrive in a much more competitive environment. She needs to learn that achievement is directly correlated to work and decide how hard she wants to work. She will have to learn to deal with difficult people as well. Too bad it’s not only in middle school that she’ll come across idiots. We all have to learn these lessons at some point.

But that’s tomorrow’s problem. I don’t want to think about that stuff right now. Of course life marches on. That’s the way it’s supposed to be. As she goes through the ceremony on Friday I will be one proud father. I hope she’s as proud of herself as we are of her. I will celebrate the passing of one milestone without thinking about the next. I appreciate the person she has become, with a healthy respect for where we’ve been. From first holding her right after her birth, to putting her on that kindergarten bus, to packing her off for sleepaway camp, to now watching her leave elementary school, and everything in between. Steve Miller was right, Time keeps on slippin’ into the future… Every single day.

Photo credits: “Me on graduation day” originally uploaded by judyboo