You are constantly changing. We all are. You live, you learn, you adapt, you change. It seems that if you pay attention, every 7-9 years or so you realize you hardly recognize the person looking back at you from the mirror. Sometimes the changes are very positive. Other times a cycle is not as favorable. That’s part of the experience. Yet many people don’t think anything changes. They expect the same person year after year.

I am a case in point. I have owned my anger issues from growing up and my early adulthood. They resulted in a number of failed jobs and relationships. It wasn’t until I had to face the reality that my kids would grow up in fear of me that I decided to change. It wasn’t easy, but I have been working at it diligently for the past 8 years, and at this point I really don’t get angry very often. 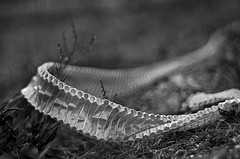 But lots of folks still see my grumpy persona, even though I’m not grumpy. For example I was briefing a new company a few weeks ago. We went through their pitch, and I provided some feedback. Some of it was hard for them to hear because their story needed a lot of work. At some point during the discussion, the CEO said, “You’re not so mean.” Uh, what? It turns out the PR handlers had prepared them for some kind of troll under the bridge waiting to chew their heads off.

At one point I probably was that troll. I would say inflammatory things and be disagreeable because I didn’t understand my own anger. Belittling others made me feel better. I was not about helping the other person, I was about my own issues. I convinced myself that being a douche was a better way to get my message across. That approach was definitely more memorable, but not in a positive way. So as I changed my approach to business changed as well. Most folks appreciate the kinder Incite I provide. Others miss crankypants, but that’s probably because they are pretty cranky themselves and they wanted someone to commiserate over their miserable existence.

What’s funny is that when I meet new people, they have no idea about my old curmudgeon persona. So they are very surprised when someone tells a story about me being a prick back in the day. That kind of story is inconsistent with what they see. Some folks would get offended by hearing those stories, but I like them. It just underscores how years of work have yielded results.

Some folks have a hard time letting go of who they thought you were, even as you change. You shed your skin and took a different shape, but all they can see is the old persona. But when you don’t want to wear that persona anymore, those folks tend to move out of your life. They need to go because don’t support your growth. They hold on to the old.

But don’t fret. New people come in. Ones who aren’t bound by who you used to be – who can appreciate who you are now. And those are the kinds of folks you should be spending time with.