This past weekend I was at my college reunion. It’s been twenty five years since I graduated. TWENTY FIVE. It’s kind of stunning when you think about it. I joked after the last reunion in 2010 that the seniors then were in diapers when I was graduating. The parents of a lot of this year’s seniors hadn’t even met. Even scarier, I’m old enough to be their parent. It turns out a couple friends who I graduated with actually have kids in college now. Yeah, that’s disturbing.

It was great to be on campus. Life is busy, so I only see some of my college friends every five years. But it seems like no time has passed. We catch up about life and things, show some pictures of our kids, and fall right back into the friendships we’ve maintained for almost thirty years. Facebook helps people feel like they are still in touch, but we aren’t. Facebook isn’t real life – it’s what you want to show the world. Fact is, everything changes, and most of that you don’t see. Some folks have been through hard times. Others are prospering. 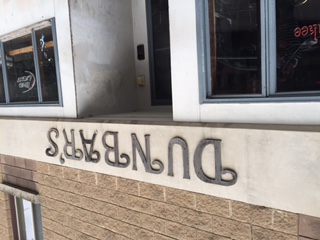 Even the campus has evolved significantly over the past five years. The off-campus area is significantly different. Some of the buildings, restaurants, & bars have the same names; but they aren’t the same. One of our favorite bars, called Rulloff’s, shut down a few years back. It was recently re-opened and pretty much looked the same. But it wasn’t. They didn’t have Bloody Marys on Thursday afternoon. The old Rulloff’s would have had galloons of Bloody Mix preparing for reunion, because that’s what many of us drank back in the day. The new regime had no idea. Everything changes.

Thankfully a bar called Dunbar’s was alive and well. They had a drink called the Combat, which was the root cause of many a crazy night during college. It was great to go into D-bars and have it be pretty much the same as we remembered. It was a dump then, and it’s a dump now. We’re trying to get one of our fraternity brothers to buy it, just to make sure it remains a dump. And to keep the Combats flowing.

It was also interesting to view my college experience from my new perspective. Not to overdramatize, but I am a significantly different person than I was at the last reunion. I view the world differently. I have no expectations for my interactions with people, and am far more accepting of everyone and appreciative of their path. Every conversation is an opportunity to learn, which I need. I guess the older I get, the more I realize I don’t know anything.

That made my weekend experience all the more gratifying. The stuff that used to annoy me about some of my college friends was no longer a problem. I realized it has always been my issue, not theirs. Some folks could tell something was different when talking to me, and that provided an opportunity to engage at a different level. Others couldn’t, and that was fine by me; it was fun to hear about their lives.

In 5 years more stuff will have changed. XX1 will be in college herself. All of us will undergo more life changes. Some will grow, others won’t. There will be new buildings and new restaurants. And I’ll still have an awesome time hanging out in the dorms until the wee hours drinking cocktails and enjoying time with some of my oldest friends. And drinking Combats, because that’s what we do.