Some folks just naturally push outside their comfort zones as a matter of course. I am one of them. Others only do things that are comfortable, which is fine if it works for them. I believe that while you are basically born with a certain risk tolerance, you can be taught to get comfortable with pushing past your comfort zone.

For example, kids who are generally shy will remain more comfortable holding up the wall at a social event, but can learn to approach people and get into the mix. It’s tough at first but you figure it out. There is always resistance the first few times you push a child beyond what they are comfortable with, and force them to try something they don’t think they can do. But I believe it needs to happen. It comes back to my general philosophy that limitations exist only in our minds, and you can move past those limitations once you learn to face your fear. 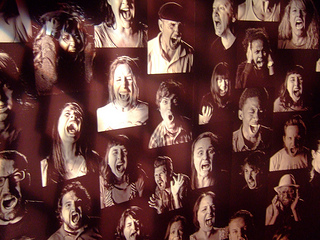 The twins’ elementary school does a drama production every year. XX1 was involved when she was that age, and XX2 was one of the featured performers last year. We knew that she’d be right there auditioning for the big role, and she’d likely get one of them (as she did). But with the Boy we weren’t sure. He did the hip hop performance class at camp so he’ll perform, but that’s a bit different than standing up and performing in front of your friends and classmates. Though last year he did comment on how many of his friends were in the show, and he liked that.

We were pleased when he said he wanted to try out. The Boss helped him put together both a monologue and a song to sing for the audition. He knew all the words, but when it came time to practice he froze up. He didn’t want to do it. He wanted to quit. That was no bueno in my book. He needed to try. If he didn’t get a part, so be it. But he wasn’t going to back out because he was scared. He needed to push through that fear. It’s okay to not get the outcome you hope for, but not to quit.

So we pushed him. There were lots of tears. And we pushed some more. A bit of feet stomping at that point. So we pushed again. He finally agreed to practice for us and then to audition after we wore him out. Sure, that was a little heavy-handed, but I’m okay with it because we decided he needed to at least try.

The end result? Yes, he got a part. I’m not sure how much he likes the process of getting ready for the show. We’ll see once he gets up on stage and performs for everyone whether it’s something he will want to do again. But whether he does it again doesn’t matter. He can always say he tried, even when he didn’t want to. That he didn’t let fear stop him from doing something. And that’s the most important lesson of all.

Monitoring the Hybrid Cloud: Evolving to the CloudSOC

The vendor is notified. 15 FREE NON-DISCLOSURE days go by. CERT is notified. CERT notifies the whole world 45 days later. POC code becomes available 30 days after the CERT announcement. Period. That’s just how it’s done. Move your special Tuesday to become more in line with the rest of the world. You are not a special butterfly.

“But my grandma had her credit card stolen”. So we should cancel policy so that you don’t have to help your grandma walk across the street to the bank and get a new card? Seriously? Maybe it will bring you and your grandma closer. Maybe she won’t make the same mistake again. Maybe you’ll install Invincea on her desktop instead of AVG Free Edition next time.

Nice post on working on getting your son out of his comfort zone.  Wonder how we could do that with shy adults (or even ourselves)?  Or would they (we) stomp their feet and cry?

Usually works out to “hey, that wasn’t so bad” after a presentation to management, or another department.